I've been peeling onions in the backyard these past nights.  Based on some questions from Marek and Carl, they were experiencing strange DEC behavior when guiding near Sadr during August.  I felt that much of the problem was due to tracking through the Zenith where scope balance is most ineffective at keeping DEC meshed.

Since I'd moved onto the problem after handling some of the earlier questions about Gemini systems and getting the camera cooling nailed down, my current target is the same region as the problem area.  I quickly saw similar DEC jumping as bad as what Marek was experiencing.

Several nights of slow changes and testing and here's what I've found:

The mesh for the ring and worm gear on the Losmandy G11 is touchy and critical for good guiding.  Keeping mesh on RA is easy because you can bias this axis to be weighted to the East.  DEC is a little different because depending on polar alignment, a bias would need to shift depending on which side of the meridian the target is.

I found that when tightening the mesh on the DEC gears on my G11 there was a jerkiness to slews.  After backing off on the mesh and also rebalancing, the jerkiness went away at the expense of extreme backlash or slop in the gears.

Eventually, I found that the problem with jerkiness under tighter settings was because the ring gear was unlubricated.  When I'd cleaned up the mount before to replace the clutch pads, I'd cleaned out all the grease with the thought that just lubricating the worm was enough.  Once I cleaned the worm and added new grease along the entire ring, I found that the mesh on the DEC gear could be set much tighter than before with very little backlash!

I also did the same exercise with the RA worm and ring.  This mount has the Ovision worm so it's usually been pretty good about proper alignment and adjusting.  One thing I did find interesting was that the worm wanted to slide laterally in the bearings when the RA axis was lifted by hand.  This raised some questions about how to adjust the bearing.  The Ovision site says that the end play on the assembly is set at the factory and shouldn't need adjusting.  However, in looking on the Losmandy Users yahoo group, there were some references to how to set this adjustment.  What I did was to slowly screw the end cap 1/4 turn at a time while looking for lateral movement in the worm.  Once I did not see any movement with the unaided eye, I felt that this was good enough.  This adjustment should reduce the need for heavy bias weights on the RA axis.

Back to evaluating the DEC axis, I saw that guiding did show periodic jumps even with the regreasing and remesh.  Slowly, I started playing with DEC imbalance and with the settings in Maxim.

What I found was that a slight bias towards a camera-heavy bias is important.  It's also important to note which side of the meridian and the declination that will be used.  My G11 has a stiff DEC axis and will move much easier when the scope is on the west side vs when it's on the east side.  I believe that much of that stiffness is due to the wire harness.  Knowing how the system wants to balance is important to getting good guiding.

Also, I see that stiction is almost unavoidable mechanically.  The guiding software usually has a setting to avoid switching directions and deliberate non-perfect polar alignment may help keep the mount movements going in the same direction, thus reducing the chance for a stuck gear.  I've found that using the Maxim stiction control set to the minimum of 3 cycles seems to help significantly.


Note that I've set a small maximum movement of just .20-.25 on the axes.  This was because I'd noticed that when the guiding required big corrections, it tended to over-shoot.

Also, I've shifted to using 3 second exposures.  Using a long exposure allows more guide stars and with careful control of the gain setting, I can get a star that is just under the max value and can have a good profile.  Using a star with a very sharp profile with a FWHM of about 3 pixels is great for guiding.  I noticed the accuracy of the movements increased signficantly when selecting the best star.  In the end, I used an 8th magnitude star in favor over Sadr.  I still had to watch the gain settings and kept the SSAG set to about 20% to keep using the 3 second exposures.

Additionally, I turned on TVC on the Gemini control panel.  Because periodic stiction still happens, the mount does need to reverse the DEC guiding.  To mimimize the amount of spinning that the guiding has to perform to correct the situation, I've set TVC to 5.   This means that the DEC axis will spin for 5 ms at a fast rate when a change in direction is sent.

The results of all this work is a guiding graph that looks like this: 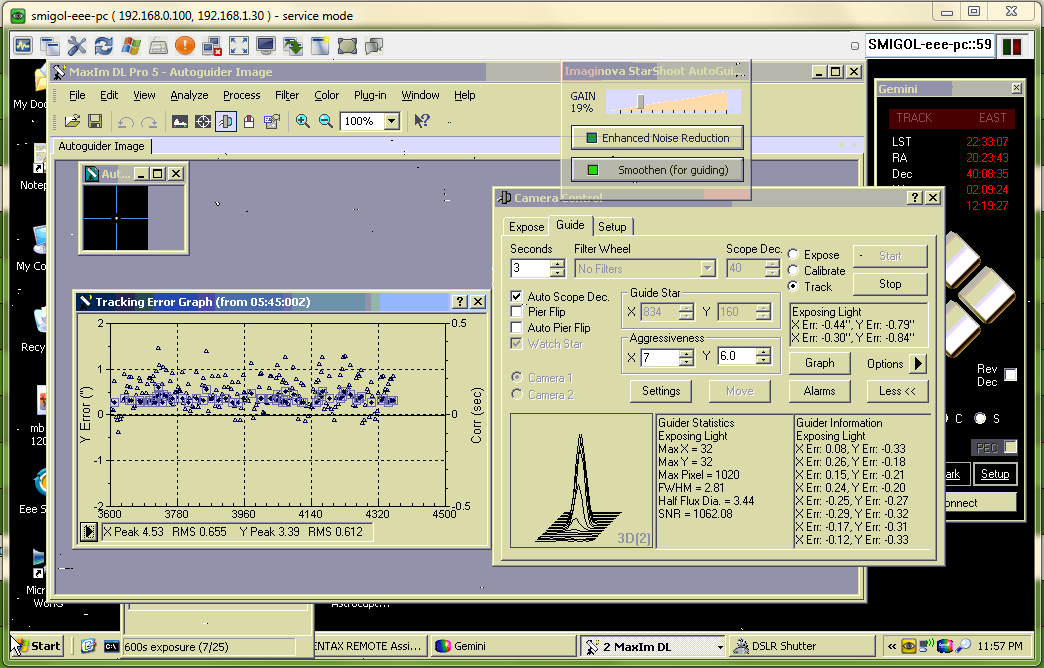 This picture shows the guiding plot of just the Y axis over 15 minutes.  Note the scale on the left plots arc seconds and the scale on the right plots seconds for the duration of the correction movement.  A typical excursion is seen at about 4320.  These excursions are well controlled and fall within a 1 arc second range.  Usually these are not visible in the final image.

Lastly, I think there is some correlation between the download of data from the DSLR and spikes on the guide position.  I don't think these are due to vibration but may be due to data bandwidth.  Will need to keep testing.  Ideally, I'd like to test with a guider that can do subframe downloads and I don't think the old SSAG can support these under Maxim.  Using a subframe would improve download speed and the data bandwidth would be less limited.  Again, the current spikes are so small that it's not really visible.