A Large Finger with Modified Base 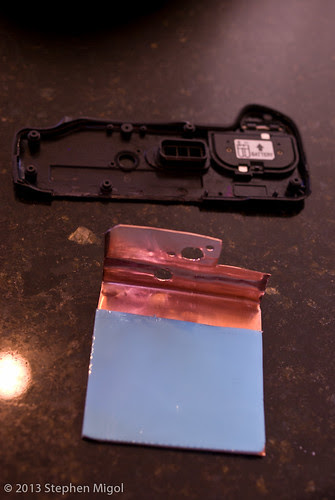 A Large Finger with Modified Base, a photo by S Migol on Flickr.
After testing with the exposed Pentax K10D camera, I wanted to route the finger through a slot in the base plastic. I could have left the camera open to the night air, but quick testing for light leaks showed that this was a bad idea.

With a dremel tool and some cutting and fitting work with a pair of pliers and tin snips, I was able to trim the copper finger and get the whole assembly to fit together better.

Before I put the parts together, I smeared a thin bead of thermal compound on the CCD assembly plate. This should help improve the transfer in the absence of the gel pad.

Seen here is a larger gel pad that I had in place originally to provide some continual connection with the LCD screen. As the original effort cooled this area, I wanted to provide something similar for testing.

I've been testing via a few standard ways:
What I've learned:
There are some interesting developments that I'm going to add to the way I work with this device.  Up to now, I've just run it wide open all the time.  I thought that letting it pull as much heat as it could all the time would be the best option.  With extensive checking while the camera was in the fridge, I was able to adjust the dial and look at the current draw to identify what the thermal probe was indicating.

I found that the device will not cool much below -5 C.  This was about a 10C drop from the interior of the fridge.  This was determined by adjusting the dial to see when the cooling cycle would start pulling current.  I noticed that getting to 0C was pretty quick and that the final -5C was slow.

In testing on the desktop in 15C ambient temperatures, 5C was reached within 10 minutes.  0C was reached in 20 minutes.  Holding the temperature at 0C results in a draw of 2.65A (vs 3.46 A during full power).  This should give a bit more life to batteries in tough situations.

Next testing to do: