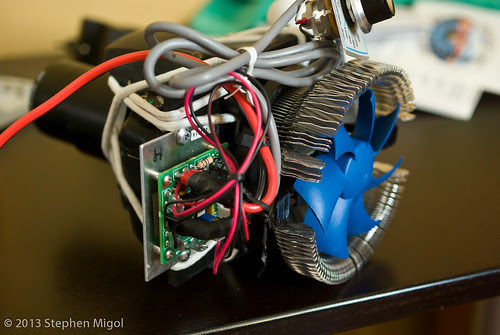 Ready for more testing., a photo by S Migol on Flickr.
Via Flickr:
The new configuration is complete.

The cooler is assembled with a trimmed finger in place. There's a new peltier device, a 40 Watt unit from Tellurex. Testing during assembly required several stops and starts. I found that I couldn't rely on the thermal gel material at all to help with heat or cold sinking the device. Instead, I had to use some thermal compound that I had lying about. I may upgrade this in the future.

I've also done away with the old sock for insulation, I'm using thick weatherstripping that is placed directly at the edge of the device and fills the gap nicely.

I reused the power control and thermal probe from the previous setup. I put the thermal probe just inside the camera body up against the finger. This should give some idea of the internal temperature.

Cooling seems to be a little faster than before the change. I'll need to run a full set of tests like I did before to determine if it really is doing the job.

Once I get it out into the field it will be the real test of what it can do.

Lastly, I will probably tear into the base of the camera again and apply some thermal gel pad near the back of the CCD. I'm nearly at the point of no return where I would never use this camera body for anything other than astronomy. 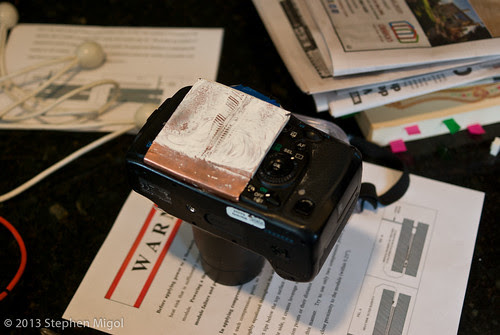 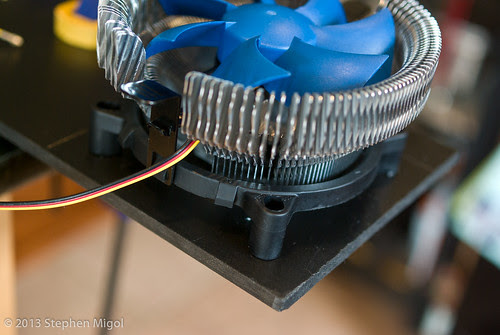 With further testing today inside the house at ambient temperatures of 20C, I was less than impressed. I think that much of the challenge is that there is a lot of thermal energy leakage. I've been using a closed cell foam thermal strip to enclose the area near the heatsink. The thick nature of this foam keeps me from being able to see what's going on at the junction. I tested without the obscuring foam and I could see that the copper plate near the TEC gets frosty. I'm hoping that the foam keeps this from happening.

A few more things to consider for optimizing the setup:
Right now, the camera is chugging away in the back yard with local temps at 37F.  The sensor says that the plate is 0C at the entrance to the camera.  Much of this is because of the local cold temps, not because of the TEC.  I'll check on it in an hour.

I've been considering getting some cheap heat pipes as well.  If I used those to help move heat out of the camera, it could get better results.  Would have to use ones that can handle temps below freezing.
DSLR Cooling Modification Pentax K10D