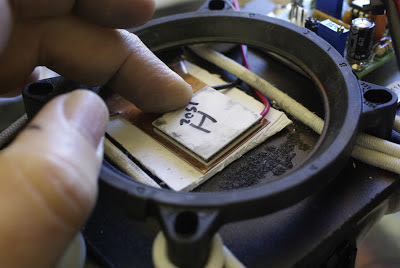 What did this mean for the configuration?


What did all this do?

I was able to see that the device did a better faster job of cooling with much less power waste.  Instead of a max draw of 3 or more amps, the smaller device pulls 2 amps.  This will mean less wasted power in the field.

I'll see how fast it pulls the camera down at night.

Still to be done:

So far what I've seen is that the darks from the last two nights are giving weird results in calibration in Maxim.  Nothing I can't fix in PI with DBE.  Just strange that there's a halo.

I'll do another few more nights of testing to see what I can get.


With the system running in the back yard, I've been rather pleased with the results so far.  It's been actually getting results below 0C (although the camera EXIF temp records 5C).  When it nears the set temp, the power requirements drop from 2.08 A to 1.6 A or lower.  Not bad and it's much better than what I was getting with the other setup.

This should allow me to run the dew heaters a little harder to help fight the moisture problem here in at home.

I've run the numbers on the flexure from last night and there's not much to say other than that it's still there.  I was hoping that some firm tightening of the rings would make a difference.  It appears that this did not make any change.

What this means is that there is still a sag in the rings someplace.  Given the way the stars appear to run "fast" when the scope is tracking from East to West it leads me back to the model I was using before.  I'm not sure what the problem may be.  If I think about the way the guidescope might sag relative to the main scope, then the stars should move in the opposite direction than they are.  This makes me consider the sagging of the main scope since the rings were suspect before.  However, the way I consider this problem is that the main scope should sag more at lower altitudes rather than at zenith.