What I'm Doing About Flare

As I've noted in earlier posts, off axis flare is a real thing that I've started to address.  I believe that the reason why flare wasn't noticed before was that my efforts with picture taking was mostly on brighter objects and my poor methods of calibration wasn't pushing the exposures enough to see the flare.

Now that I'm aware of it, I can see it more readily.


I've been marginally successful with controlling it with some flocking efforts, mostly concentrating on the bright anodized components in the feathertouch focuser.

At the latest project, I noticed that the flare was coming from an area about 1.3 degrees from the edge of the frame.  This got me to think about how to better flock the components.

I added some rings of felting in the flattener.  See these photos for a view of what I did.  Note how I've added flocking to the T42/Kmount ring.  I don't expect there to be much possibility of glinting on these elements, but it doesn't hurt to control it. 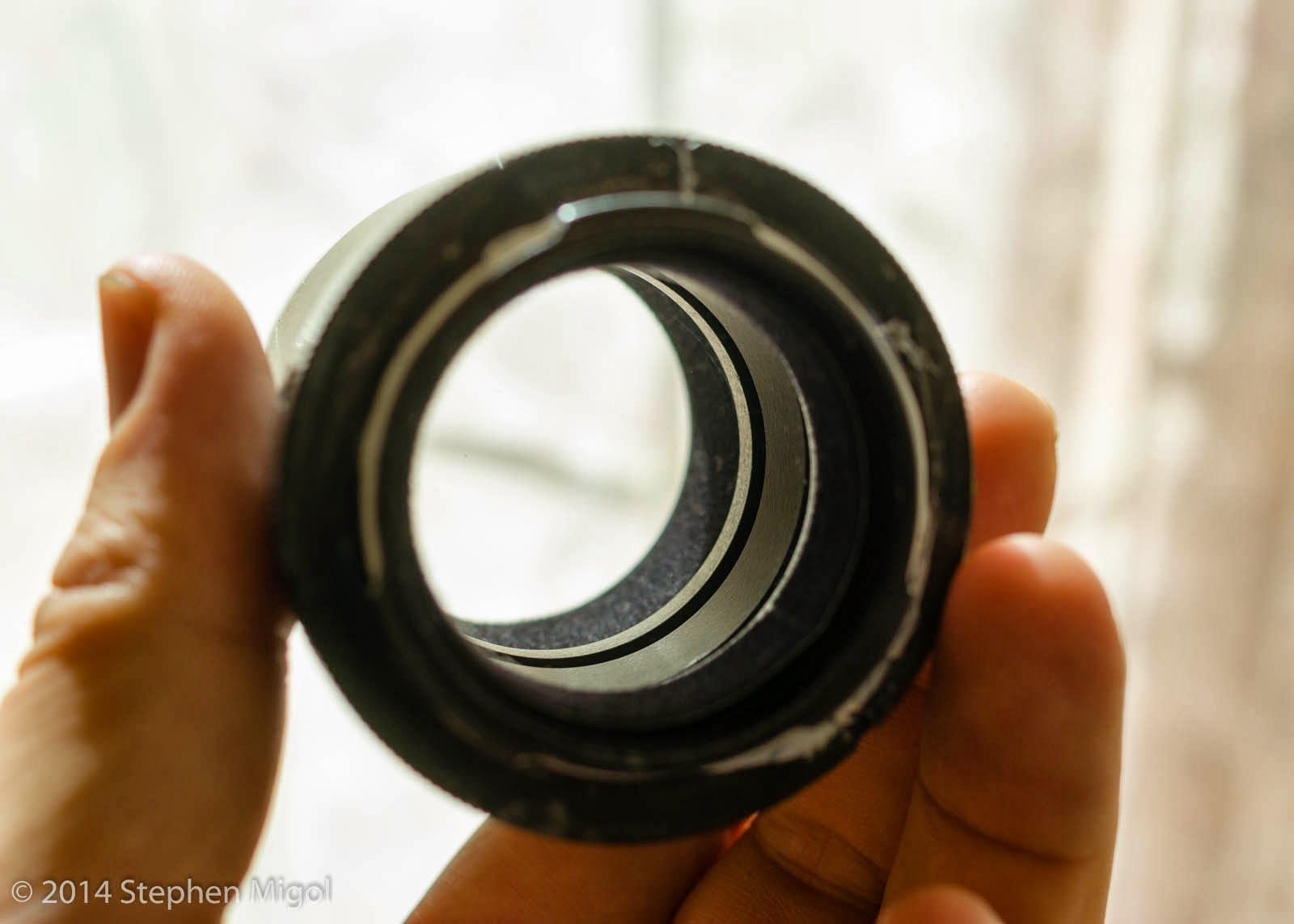 I'm expecting a certain amount of fiber shedding.  I made the effort to drag some tape on the felting to pull off loose threads.  Hopefully this will keep the shedding to a minimum.

As the photos show, there's some exposed metal between the elements of the flattener.  These may reflect light if they are exposed at the proper angle.  I checked with Vic of Stellarvue and his comment was that the retaining ring should be just finger tight.  Well, mine is gummed up from previous experiments with adhesive flocking.  Not going to be able to get into this spot.


Instead, I'm going after the idea of using a longer hood to control off-axis light.  The idea is that by keeping the sensor from seeing the bright stars, it's unlikely to have as much of an effect.

I was looking at the potential of a custom lens hood like the ones on this site.

Based on some math provided by the HOODCALC.xls spreadsheet that I found on the Pentax Forum, I've found that the hood length for the APS-C sized camera should be about 450-500mm long.  That's pretty big.  Up to now, I've been using a foam paper hood rolled around the existing dew shield to extend the structure.  Based on the math, I'd need to add another 6 inches or more to the end of this structure.

I played with adding different shapes to the foam paper recently.  I tried rolling it up inside the dew shield.  This works well but it does raise the challenge of repeatability.  Plus, it shows the fact that a long extension of material will sag under its own weight. For anything that's going to be permanent, I'll need something that's light, won't sag, and fairly durable.  I've been thinking about rolled aluminum.  Advantage is that I could get it made from something fairly sturdy and not worry about crushing it.  Disadvantage is cost.

What remains to be seen is how this extended tube will impact piggyback shots.  I ruined a few film shots back at Calstar because the hood extended into the frame.  I'd like to avoid this happening in the future, too.

For now, I can use the newly rolled up foam paper that has some carefully placed velcro tabs.  It may serve the purpose well.

A possible concept that I may return to try would be to cut a rectangular mask out of some cardstock and insert this into the dewshield.  If I put it right at the objective, it could mask the offending areas pretty easily.  This would allow a shorter hood to be used with minimal changes.  I'll do some math and cut one as I have the chance.


Another exercise that I completed today was getting back into the camera.  I'd been suspecting that the cold finger wasn't making good contact with the chassis of the camera.  Finally tore it apart and checked. 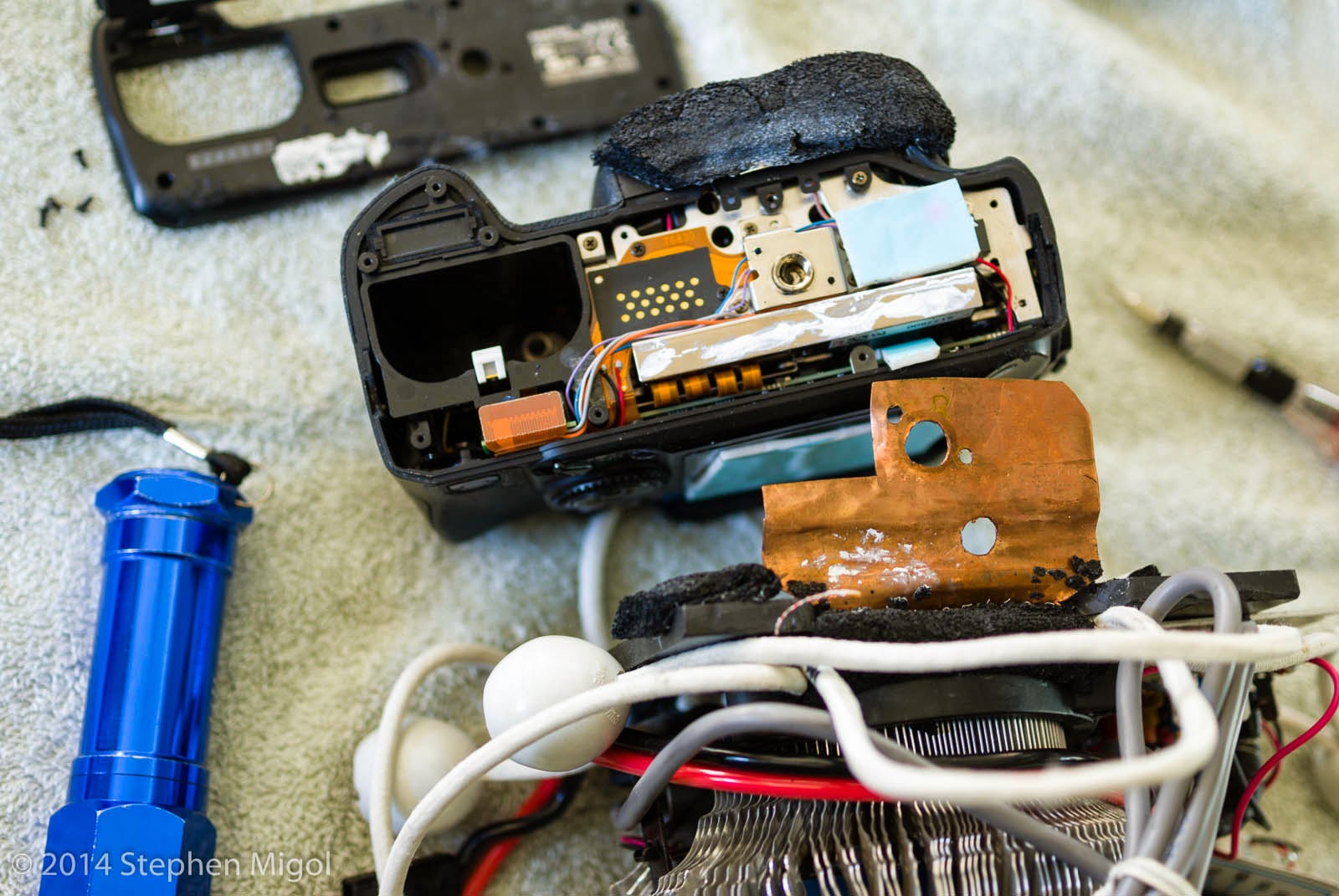 Sure enough, the old thermal paste tells an obvious tale.  The old material was barely touching.  To remedy this situation, I bent the copper to fit a bit tighter.  I also inserted a slip of foam paper to apply some slight pressure as well as thermally insulate some of these parts.  Lastly, I moved the thermal probe to a better place inside the assembly where it can make contact between the finger and the chassis.

In my testing afterwards, the thermistor controller showed no drop in temperature below 10C. I base this measurement by turning the power controller down until it stops pulling a high amp load.  Ambient temperatures were 22C.  EXIF temperature was 17C.   I also measured the temperatures on the camera body at a few different places.  This tells me that wrapping the camera in a thermal blanket is important.  I'd already inserted a piece of foam paper between the dovetail and the camera body.  This should help control unwanted heat entry to the camera.

On further testing, I mounted the camera to the telescope, wrapped the camera body in thermal layers, and set it up to do a run of darks while in the shed.  The shed temps are approaching 28C and surprisingly, the thermistor controller is suggesting the sensor is -15C.  I'll need to check later to see what the EXIF temperatures are.  If this works well, then I can expect very low noise in the field going forward!

Returning to this post after some time.  The shed experiment was inconclusive.  EXIF temperatures started at 18C and went up to 25C before the voltage drop from the outside power to the 12V converter was too much.  Will have to try again and see what I get using a different cabling situation, more like the way the car setup where the 12V is provided at the start of the extension cord.
DSLR Cooling flocking peltier device Pentax K10D