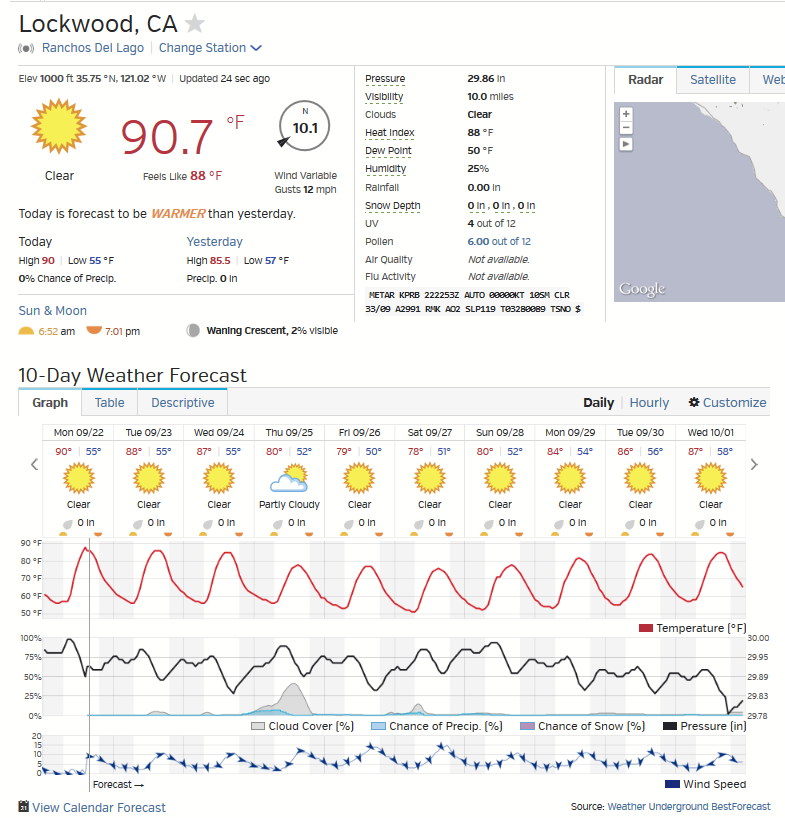 Looking pretty good for the goal of taking pictures through the night.  There's a little bit of weather that may come to northern California on Thursday.  It shouldn't effect the night sky.

It's pretty finicky, or, it was.  I've replaced the clutch pads which fixed a lot of the problem of jamming DEC and RA.  The old pads must have been thin enough to lock up the ring gear or shift it too far, causing binding with the worm gear.  I replaced the motor reducing gearbox on the DEC axis.  This seemed to eliminate the whole problem with that axis completely.   The old gearbox was bad, broken either by high torque or by collision.

There are still nagging problems that will either be a non-issue or will make me replace the motors in the field and go back to a push-to configuration.   Also, two motors are bad.  One has a bad encoder and is non-usable.  The other is very weak and pulls a lot of current when in use.  It probably has a short in some coils.  It is too weak to use in RA and is only serviceable in DEC at very low slew speeds.  I've set it to 400 - which is half what the default is for the GM8.  I disassembled the motors to see if I could take the guts from one and put it on the encoder for another.  Unfortunately, I am unable to perform this task.  Once I'm back, I'll have to scrape together the cash to buy two more motors and swap from the G11 to the GM8.  Losmandy is only selling the high torque motors, so I'll put the new ones on the G11 and use the old ones on the GM8.  I'll probably leave the slew speed at 400 to keep things putting along.

I packed the car today excepting the last few clothes, the computers and books, some lenses, and one last Pentax 67 body.  If I keep loading this car so heavy, I'll really need to invest in a rooftop pod.  There's no room for a passenger at the moment.

I've managed to pack 5 gallons of fresh water with two gallons in the freezer to keep food.
Calstar 2014