In the past, I've been cooling the DSLR for astrophotography by using a peltier device with CPU style fan heatsink.  It's been working OK, but I've not been getting the best performance out of the peltier devices because the waste heat simply hasn't been removed fast enough. 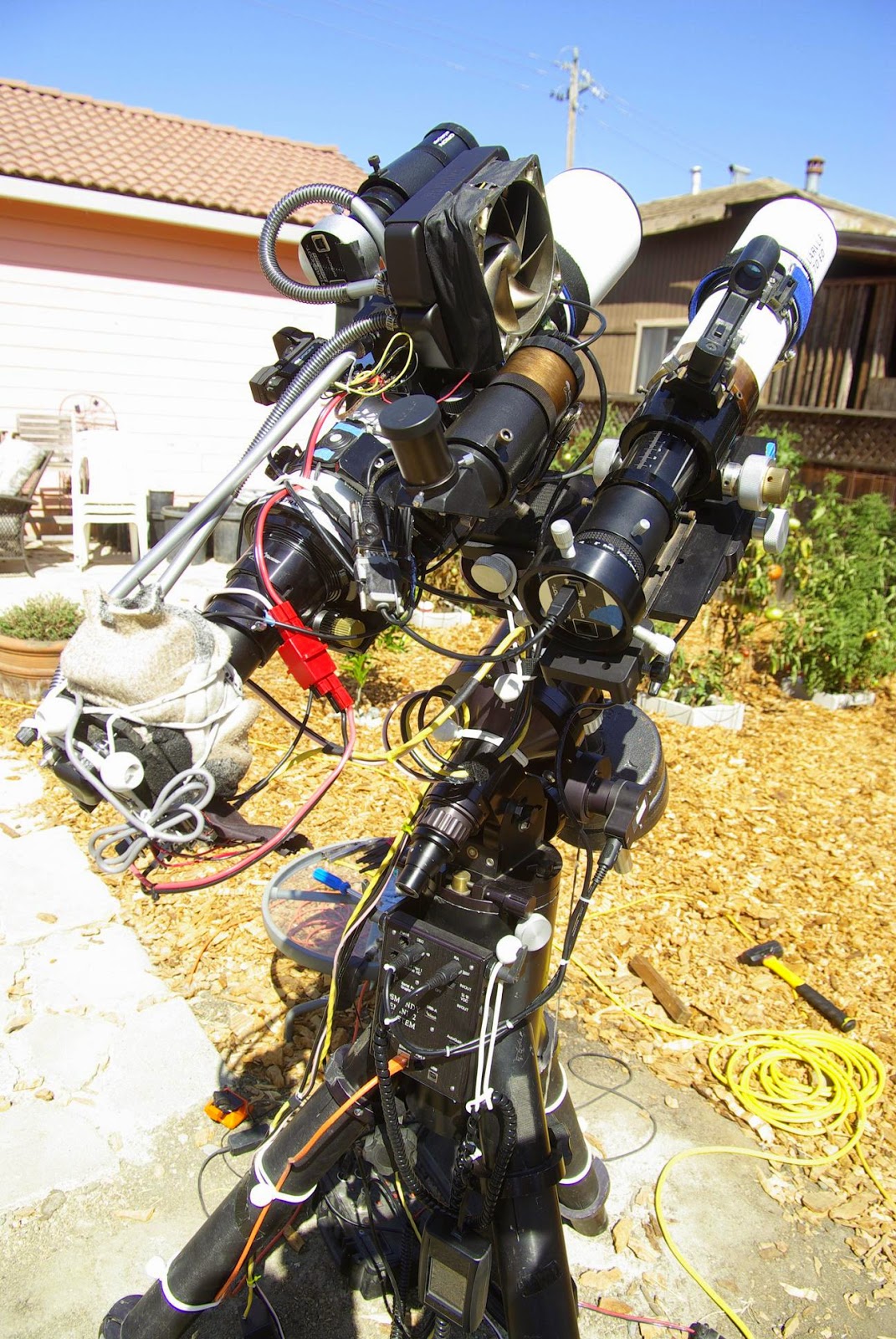 I knew that the real performance gain would come from better management of heat.  Also, using a single peltier device does not drop the temperature enough to cool the camera.  Thus, I've been playing with stacked cooling chip.  However, these stacked devices will generate a large amount of waste heat on their own, requiring even more heat management.

I use a water cooling system on my home computer, so I was already familiar with the requirements for fluid flow, pumps, heat sink sizes, tubing, etc.  After doing some more research on the yahoo group for DSLR Modifications, I settled on some hardware.

In the photos, you can see the waterblock mounted on the back of the camera.  This is the same location as the old air based cooler.  The advantage that the water block has over the old system is that it weighs a lot less (190g vs nearly 300g).  Granted, the tubing and mounting backplate adds a bit of weight, but this still comes out under the total of the old configuration. 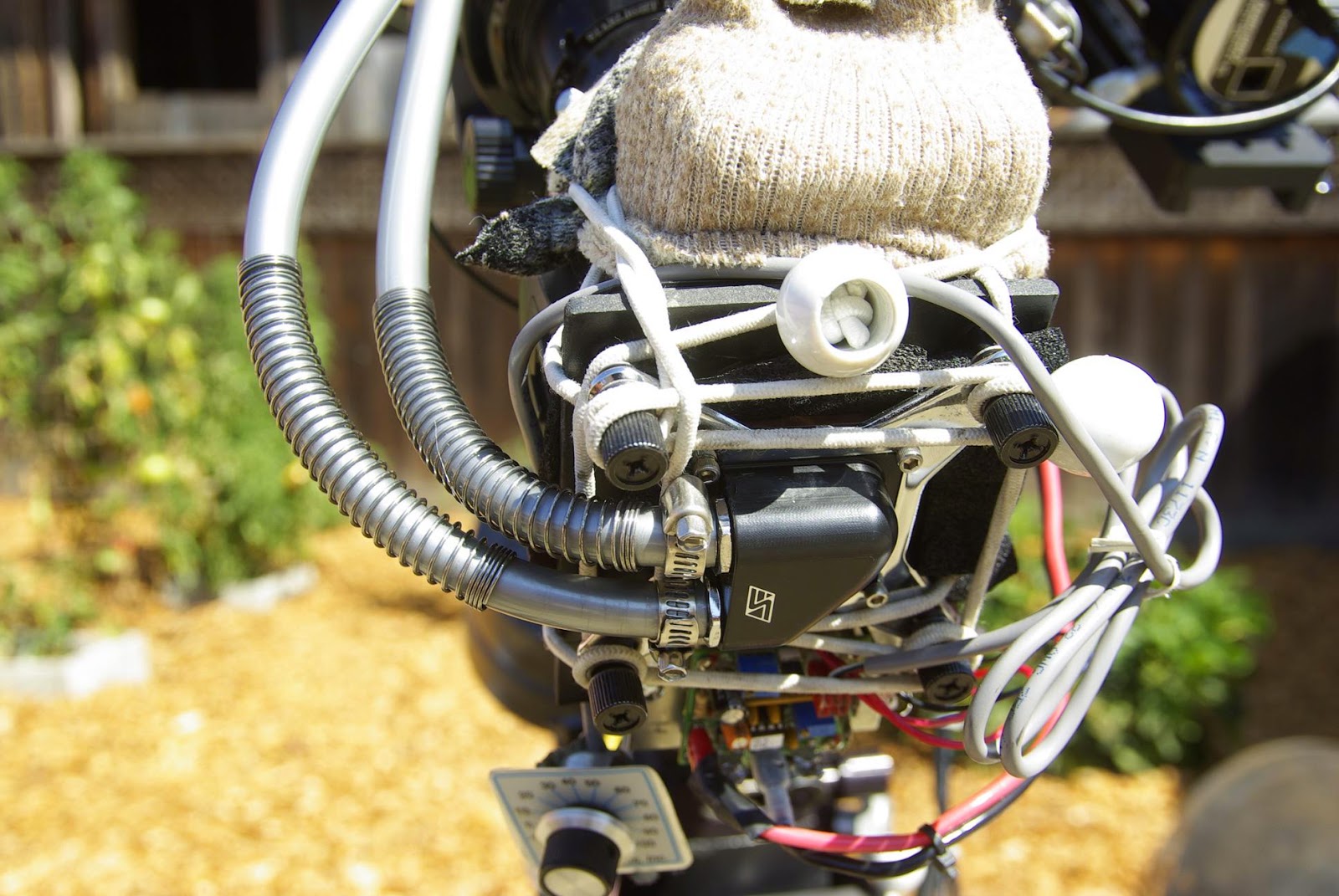 The thumbscrews of the waterblock allow different thicknesses of peltier devices.  This is good because I plan to change the setup over time.  I've already changed it once.

The cooling surface of the waterblock is much larger than the air cooler.  This allows the use of peltier devices up to 50mm square.  The old cooler was unable to handle sizes beyond 30mm.  It's also made out of copper, giving better thermal transfer performance. Using larger devices required a larger cold finger and so I cut a new one to enter the camera.  At this same time I re-glued the shake reduction system in the DSLR to ensure that it would not move.

There's still a rat's nest of bungee cords.  I've yet to figure out a simple way to hold the assembly to the back of the camera without blocking the tripod socket.  I want to be able to use the DSLR with camera lenses again and this requires keeping the tripod clear.  Maybe a 3d printed part would work.  It's not worth the additional effort until the cords start to wear out. 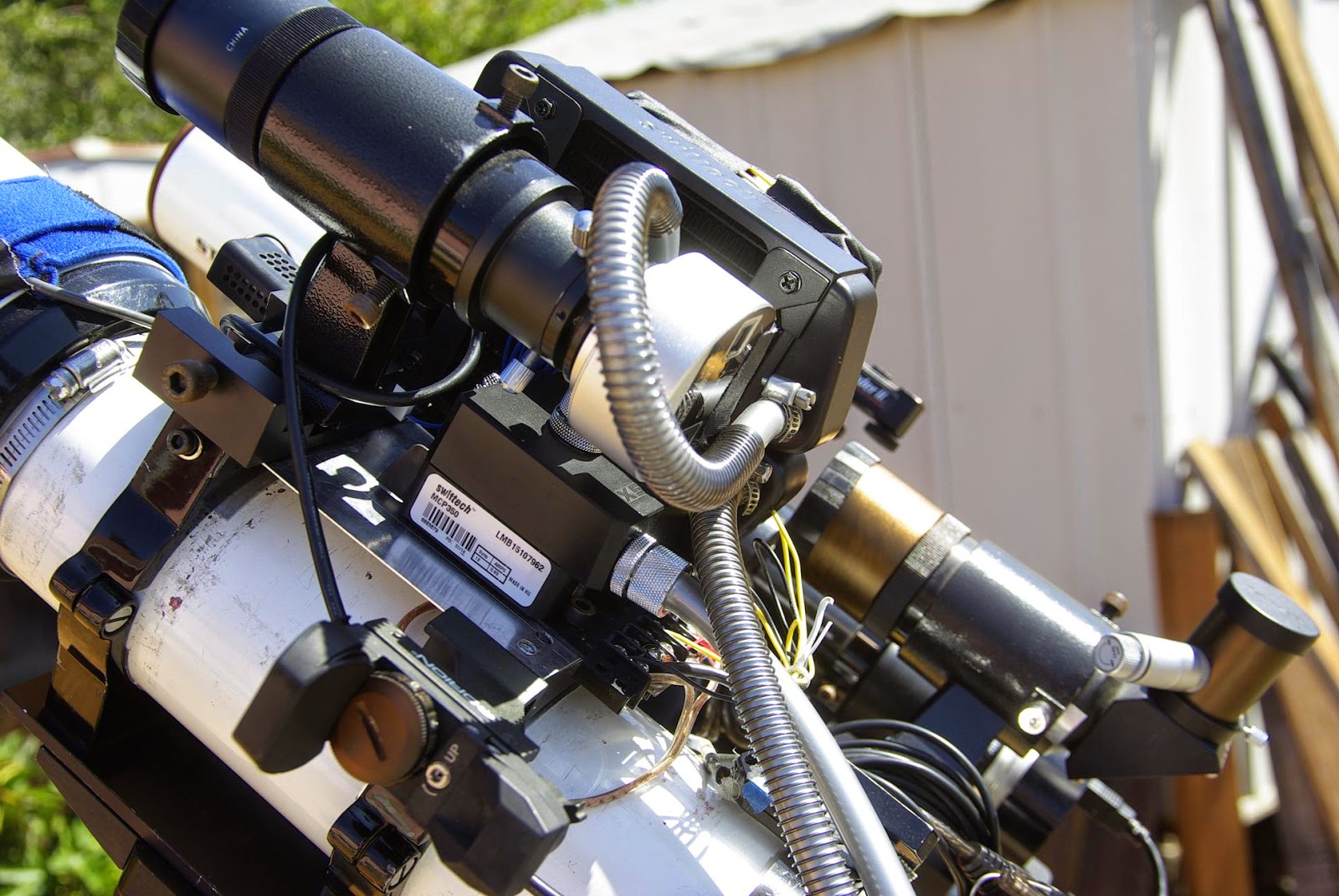 The pump, fan, miniguider, and USB hub are mounted on an aluminum plate on top of the rings for the SV4.  I used some old aluminum sheet that I had sitting around from an old project.  I drilled holes and then mounted all the various parts into place.  I was a little concerned that the pump and fan would create a lot of vibration, so I used a fan controller to reduce the speed.  The pump has turned out to have very little vibration, once air was purged.  Interestingly, I've noted that the pump will not start at the initial voltage of 13V.  Instead, it will start once the peltier devices begin to cool.  That's when the voltage drops to 11V.  I'd like to control this behavior a little more.

The fan seems to do a better job of pushing air through the radiator when it's running slower than top speed.  I can feel the air flow on the hot side when I put my hand there.  This airflow may eventually help control dew on the miniguider when I start using it. 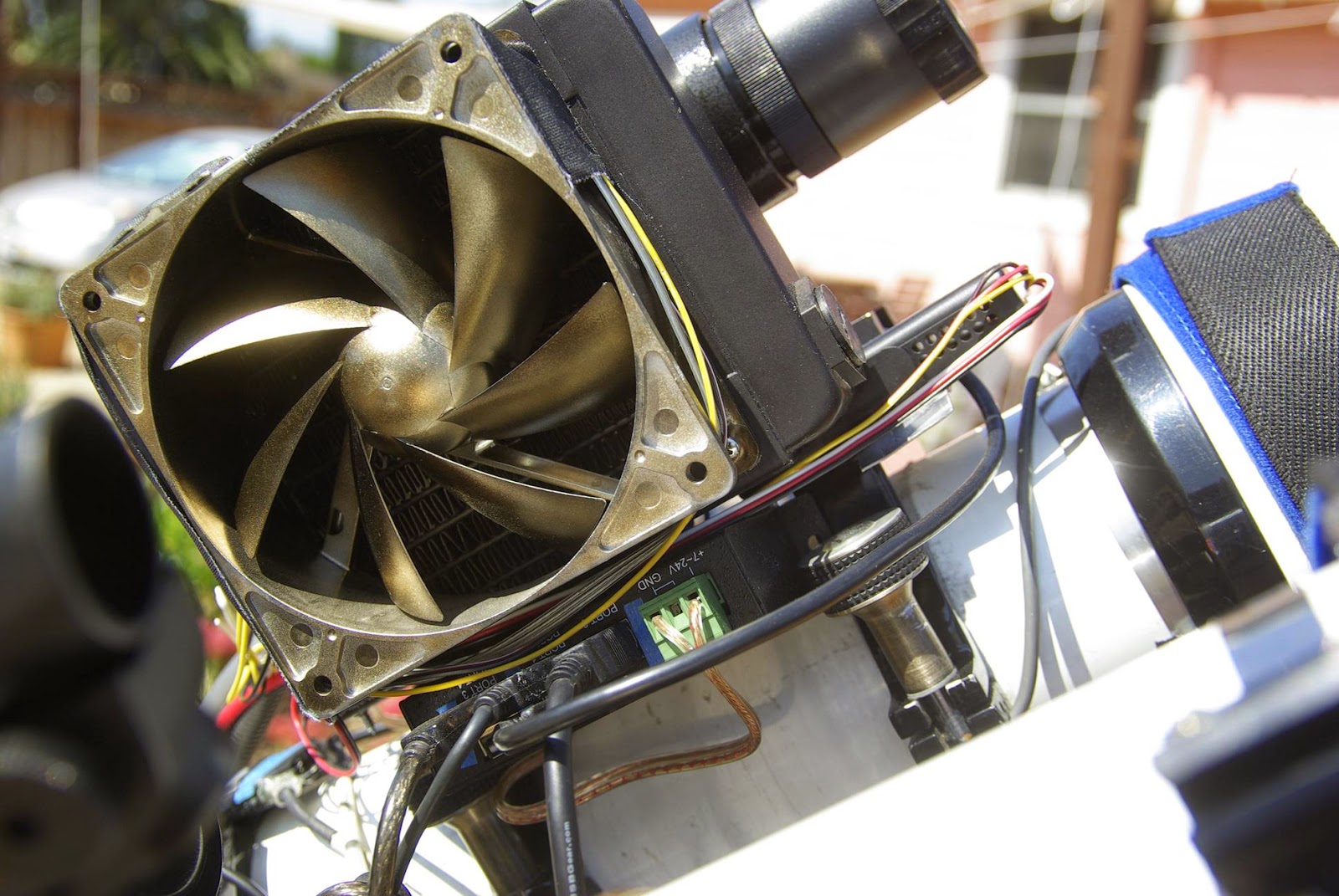 In this picture the USB hub can also be seen between the SV4 rings.  It's an accident of size.  The hub fits nearly exactly between the rings.  I needed to replace the old USB hub because the original repeater failed with a burned chip.  I purchased an industrial rated hub with its internal power supply able to take voltages from 7-24V.  Perfect for handling the ups and downs on this scope.  The LEDs were too bright, some tape was used to dim them.  As the old serial port connector was also fried at the same time, a new device was purchased and put into service.

When I originally built the system, I used a single peltier device, the TEC 12705.  This did an OK job of proof of concept.  I could see condensation on the exposed parts of the cold finger when it was turned on.  Eventually, I noticed some broken solder joints where I'd connected it to the Oven Industries PWM thermostat.  I knew that stacking a higher capacity device on top of the 12705 would be required.  I found the largest part I could get that would run at 12V and fit in the system: TEC 12710.  This stronger device is rated for 85Watts at 25C and 15V.  In use, the stack pulls about 7 A at 13V.  I've needed to renew the closed cell foam strips to keep rime ice from forming.  This is a nice problem to have - it shows that the system is working well.  I put a thermometer on the cold finder where it enters the camera body and saw that it was reading a -20C drop from ambient (giving -5C).  How well this changes the thermal situation inside the camera is a bit uncontrolled so I still have to make a library of darks.

Lastly, I've ditched the dovetail bar that used to support the camera.  This allows the DSLR to rotate.  After extensive testing, I've determined that the flexure movement in RA is not from the camera sagging.  Recent work in the back yard shows that the movement remains in RA even after rotating the camera 90 degrees.

Another small update since this was posted.  I noticed that the practice in the backyard over the last few nights has revealed that the shake reduction system in the camera is working again.  This means that the low temperature hot melt glue gave way.  I think I'll switch to high temperature.  The whole reason why I have to use the glue is because the shutter has failed.  Thus, the CCD is gathering photons before the exposure begins.  Thus, bright stars show a small streak as the sensor shifts.  Getting back into the camera is a major effort now with the cooling system in place.  It never was easy, this just makes it harder.
DSLR Cooling