July 08, 2015
As noted earlier, I found that the SV4 focuser had slipped because the grub screws were not very tight.  Thus, I recollimated by using a laser tool.

Over two nights I centered and then tested the collimation with star tests.  To eliminate nebulosity being a problem for star detection, I used the Ha Continuum filter as a star field. 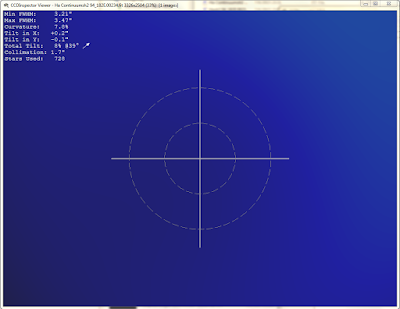 It could be done a bit better.  The challenge is that the flange around the end of the scope is pitted from previous grub screw use.  I wrapped this flange with some teflon tape to help smooth the surface to avoid the adjustment being compromised.
Collimation