June 08, 2016
The weather in the bay area has cooperated with getting the kinks out of the astrophotography setup -- or at least isolate some of them. 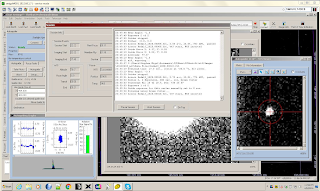 In the last week, I have been able to identify one problem and create a workaround.


I found that when sending the laptop into hibernate mode, when it would wake up, the controls for the guide camera would not be active.  Slews would work, but guide commands failed.

There was no initial clue that the failed mode was happening.  Instead, the guider would continue to show the same image, not refreshing, showing that the star never moved.  The result was that the guide graph was flat.  When I did notice the flatline, I would try a few different methods to get the guide camera back.  This also meant that recalibrating the system would fail, as well as changing any details about guide star selection.

Reconnecting the mount didn't change the situation, nor did quitting and restarting TSX or CCDAP5.  Interestingly, disconnecting and reconnecting the guider in TSX would show an error that the port was already in use.  Thus, only a reboot of the laptop fixed the problem.

The solution at this point was to fully shut down the laptop between sessions, rather than relying on hibernate mode.

On another point, the QSI camera would also fail to work properly if the laptop came online too fast after hibernate.  Getting images from the camera would fail, making CCDAP go into state where images would not download.

The short term solution that I made for the guide camera also did well to solve the problem with connecting the QSI camera.  The full boot sequence of the laptop was long enough that the cameras could come online before the operating system.

Another oddity was resolved, too.  I had run the filter offset wizard recently.  Thus, CCDAP was now applying the filter offset values after focusing. I believe that this is the source of the non-convergence of focus runs.  Because the script would attempt to focus, then apply offset, sometimes throwing the stars completely out of range.  Also, I found that the motor on the feathertouch focuser was no longer meshed fully.  To resolve this issue, I remeshed the focuser gear and put some gaffer tape on it to prevent it from working loose in the future.  I know the filter offsets were calculated with the loose focuser, so these will need to be removed.