October 11, 2016
Calstar 2016 was held at Whisper Canyon near Lake San Antonio.  This was my first time at this location and the second time that Calstar was held here.  Whisper Canyon has a smaller space than the Lake San Antonio location with the advantage that people are not spread out, saving walking in the dark.  WC features a full kitchen with two stoves and several refrigerators, minimizing the need to bring a grill and cooler.  Also, there is good cell service, a good bonus over LSA.

As the end of the season star party, it had all the good stuff: old friends, new connections, camp food, hot days, cold nights, clear skies, saying good bye to summer constellations and a preview of the winter skies. 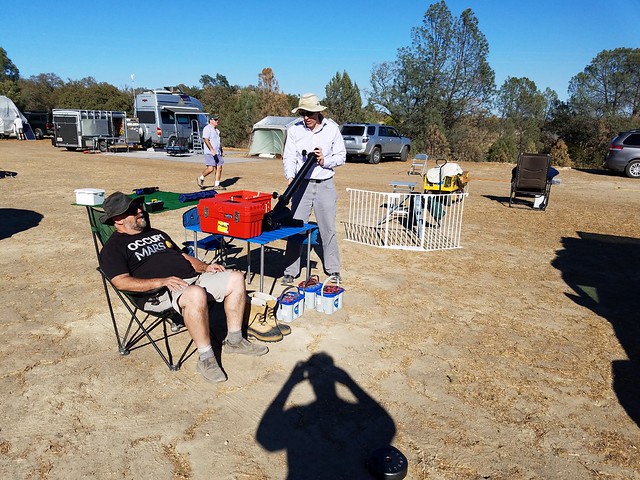 I packed heavy - bringing the film and digital gear.  The film was a duplicate of the setup used at GSSP with the dual 400 mm lenses.  The digital was the normal QSI camera on the SV4.

Driving to the site is much the same as going to LSA.  The altitude is similar.  It's closer to Ft Hunter Ligget than LSA, too.  On arrival I was treated to the standard display of jet dogfight practice.  The Loma fire was smoldering and created a pall over southern Santa Clara county.  The Whisper Canyon area also recently survived the Chimney fire, many scorched trees and blackened ground attest to the movement of the fire line. 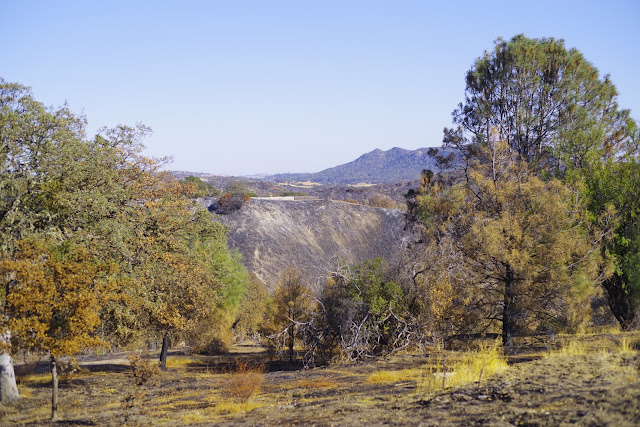 The Whisper Canyon site is bumpy.  There are deep river channels with hills.  Most people set up on a soccer field (dry, dusty, and stony - not grassy).  I was concerned about the noise the prius makes when it fires up to keep the batteries topped off.  It's pretty quiet when there's a murmur of a crowd, but at the silence past 3 am it can be disturbing.  Thus, I parked away from the field.  I expected more people to set up off the field, but it turned out that I was the only one that was remote.  Beautiful site with lots of low horizons and privacy, but it was a trek to get to lunch area and to the showers.  Not very conducive to being able to chatter with people while the 40-60 minute film exposures were running. 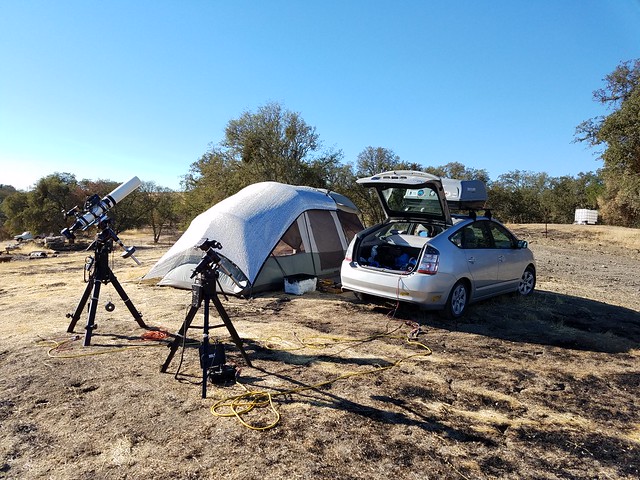 After setup on Thursday, I realized that somehow I'd managed to forget to pack a second 21 lbs counterweight to balance the film setup.  After sendng quick emails and posting on Facebook, Marek was able to save the day with a weight he brings for karmic offset.


One of the dovetails used on film setup is warped and thus it will bind very easily.  In the process of trying to remove it so that I could tighten up some screws, I managed to vibrate the whole bar and broke the epoxy holding the autoguider in place.  Another frustrated post to email, text messages, and facebook seeking two part epoxy.  Luckily, an observer on the field had some epoxy and I was able to clamp the parts while waiting for it to cure.  Thus Thursday night was a wash for film as the epoxy needed 17 hours to develop a full bond. 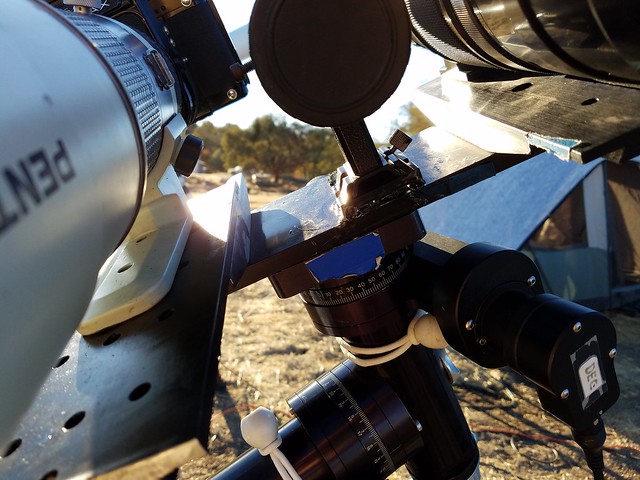 The advantage of not doing film allowed the chance to wander the field and chatter with several people.  Reconnected with friends and got caught up with news.  Dan was being the aging hipster by writing up his observing report on his Royal typewriter. 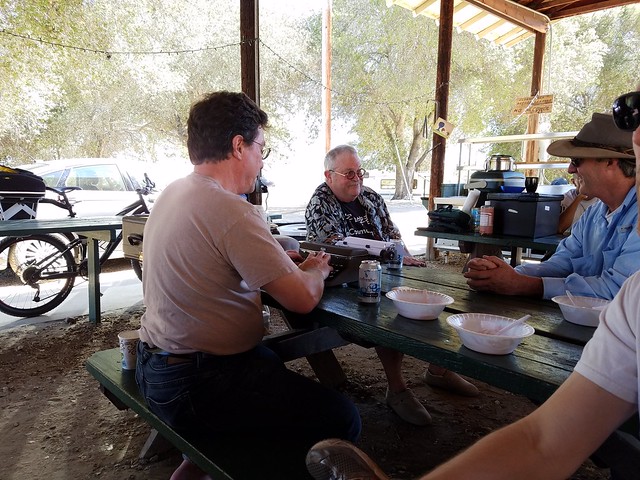 Rich Ozer made a few comments at breakfast on Friday about the passing of Rich Gerard.  The Gerard family was parting out some of his astro gear to help with costs.  I pitched in and got a 35 pan - replacing the 41 pan that I used to have.

On Friday after breakfast, I met some new contacts that were just starting the imaging practice.  I listened to their stories and struggles, made some comments and suggestions, and provided advice.  I shared some of the small parts in my supplies including an HEUIB-II filter.

On Friday afternoon, after dinner, I tried to get back to working the film setup.  I checked focus with the 400mm Takumar lens with the 77mm yellow filter in place.  Alas, I saw that it does not reach inifinity focus with the filter.  Darn!  Not sure what was happening there, it's possible that it might have been user error.  I noticed that I'd inserted the filter holder backwards and that might have contributed to the backspacing.  Will have to keep trying.

Also, I noticed that one of the external battery cable for the Pentax 67 had developed a short.  I had the small screwdrivers to take apart the device, but no small soldering iron  Another fix that will need to be done!

The bigger problem was that the SSAG on the setup appeared to not have been able to survive the fall when the epoxy was broken.  No signal was received from the camera.  I tried moving it to a different USB socket, reloading the driver, and rebooting the computer.  Nothing seemed to work.  Maxim, TSX, an PHD2 didn't see data from the camera.  Eventually, I said that the camera is dead.  When I get a chance to try again, I will see if reflashing the firmware may help.  If not, then I already have a spare that is idle and I will put it to use.  In joking with friends, I will probably make this broken device into a totem.

Thus, Friday and Saturday night was a wash for film.  As I grumbled on Facebook, Jim Cormier remarked that I could manually guide as my eyes did work.  Unfortunately, I did not bring a crosshair eyepiece nor an extra scope that could be used for the purpose.  Even if I borrowed a spare SSAG, it was already too late to get the 220 roll of E200 done.  On the bright side, this meant that I had more time to socalize and get sleep.

The digital work kept plugging away throughout all these ups and downs.  I decided to make a 6-panel mosaic of the North America Nebula area.  TheSkyX and CCDAutopilot worked well to record the project.  I did tweak the settings in CCDAP to implement goals and loops to better get samples of all the frames.  There wasn't enough coverage of the region, however, so I'll have to add more data from Montebello.  Hopefully I can get up there this week and add a couple of nights.  I may add some Ha from home to augment the luminance. 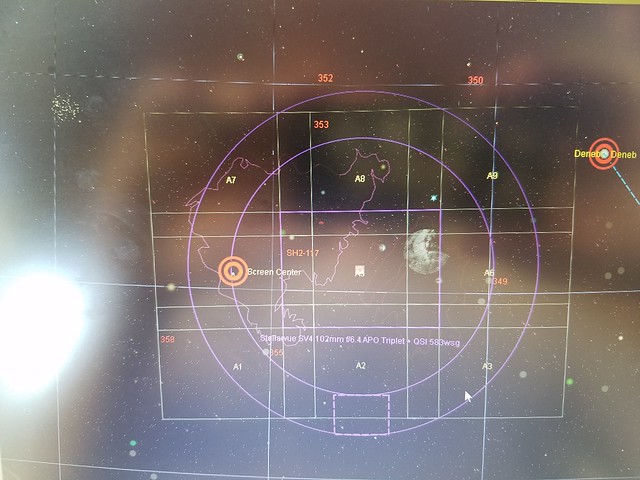 Thursday the daytime high was pretty warm, I arrived with the temps in the low 90s.  Set up the tent in the heat and got sweaty.  That night, the temps dropped to the low 50s with a gentle breeze.  Being accustomed to the hot, this made the cold a shock.  I needed all the blankets I had to assist my sleeping bag to keep me warm enough.  Friday was cooler during the day and colder at night with a strong wind.  Brr!  Transparency was middle on Thursday, worst on Friday, and best on Saturday late.

Saturday night had a wonderful bolide in the southern sky that showed green chunks as it fell towards the south.  Was moving a little slow, made me think it was probably space junk.

Joe Lin got a great picture of it from his timelapse:

Sunday morning had a lazy start for me, although others were already packing up.  I was one of the last to leave, as only Dan, Turley, Carl, and Jamie were remaining at 1pm.  I think the GSSP noon requirement has trained everyone well.  The neighborhood was returning to normal, too.  I saw more activity across the fences as people were moving their trucks around to fill agricultural tanks.  The unmistakable sound of target practice echoed across the canyon helped motivate me to keep packing as I was on an exposed hilltop.  I wam glad for the patience the neighbors had to tolerate the group, but I do note the obvious signs of inconvenience.  As a last bonus, I found the missing 21 lbs counterweight hiding underneath my tent.
Calstar 2016 Observing Report