The weather for the event was warm, ranging to warmer.  The temperature on Saturday was the highest I've felt at GSSP at 101F.  The shower truck remains the savior of the moment, helping to beat the heat.  I also would soak my t-shirt with water so that my own sweat wouldn't be over-used. 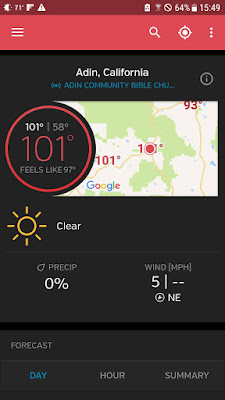 The nights were clear - Saturday night had some early clouds that disapated, benefitting the patient.

I planned to go after one digital target, LDN 673.  GSSP excels at dark nebula since the skies have low light pollution.  This target was pretty easy to setup, CCD Navigator suggested as it is pretty large and fits well on the sensor of an 8300 chip with the Stellarvue SV4.  I quickly found that 600 second exposures were not long enough to pass the evaluation, so the exposures were bumped up to 900 seconds.  This required new darks, something easily programmed with CCD Autopilot.  I gathered data for each night.  On Friday and Saturday night, I swapped the order of the filters so that an even distribution of RGB happened on each side of the meridian.

The early view of a single sub shows a decent composition.  Once I calibrate and stack the images, then I'll be back to my old challenge of color balancing in PixInsight. 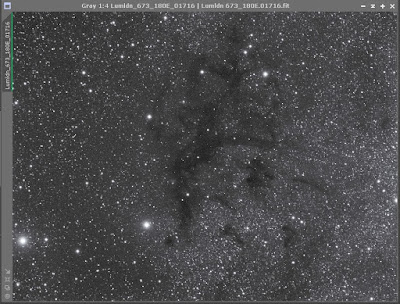 The pressure is on this time as James Turley says he wants to print the results!

I did also get a long list of film targets done.  A full 220 roll of E200 fell to the night sky, I'll be developing it once I get some more E6 rolls queued up for the chemicals.

There had to be something unfortunate that happened to offset the above success.  Here is the list of problems:

1. Forgot a Losmandy Gemini 1 power cord, only having enough to power 2 mounts, not 3.
2. Forgot a Losmandy go-to motor cable, only having enough to run 2 mounts, with just one cable for the 3rd.
3. Lost several frames of Acros due to not testing the Pentax 67 body behavior without the battery pack.  Many frames were aborted when the power is removed, the shutter will close in bulb mode.
4. The auto-focus bracket on the Maksutov telescope broke the epoxy bond.
5. The auto-focus motor on above bracket showed inconsistent behavior, juddering and sometimes reversing directions, otherwise making the motor unpredictable.
6. Keyboard of the old Asus eeepc died, forcing a hard drive swap with a second device.
7. This second device was missing significant drivers and required swapping the drive back.
8. A keyboard transplant operation only worked in one direction and left a device completely unusable before finally bluescreening the transplant recipient.