October 03, 2019
Now that the event is over, here’s what I remember about the astro activities.

I camped with my niece, Audrey. Later during the week my friend Scott also joined us.  Set up in the same spot as years before, just off the main road,   The spot affords the space to spread out with minimal exposure to lights while giving some southern views towards the central Milky Way as low as 20 degrees altitude.


The weather was hot and clear, then cooled off fast with some clouds and then a final clear, cold night. 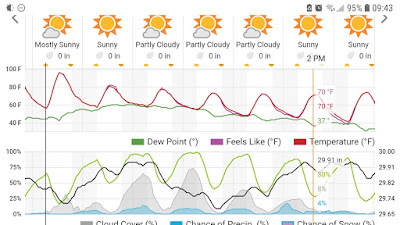 First night was spent getting one mount running with two 400mm lenses and the 67 cameras.  Since I had not done additional steps in the previous weeks to confirm software settings, I needed to do this on the field.  This consumed about an hour of time.

Very glad to use the Polemaster device as this eliminates the long process of drift polar alignment.  Really pleased with how quickly I can check alignment and get good results.

On the second G11, I had the time to run PEC training.  This was another task that could have been done at home.  I thought it needed the step as everything in the past seemed to indicate a bad periodic error.  On analysis, the curve was gentle and not erratic.  When I turned on the correction for this mount, guiding actually became worse!

Tuesday night the air was very steady and clear - I was able get guiding results in the sub-arcsecond range.  All the work tuning the mounts improved the tracking. 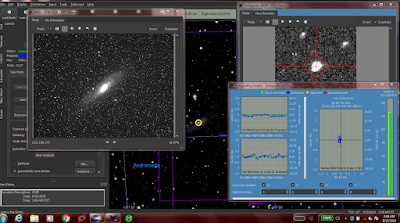 Of course, no beginning of a star party is without mistakes.  This time I left the aperture of the 400 EDIF set to F32 on Auto mode.  Thus, there will be very little, if any, starlight that will show on the film.  The whole night was under this mistake as the error was not caught until the next day.

Audrey slept in her hammock strung between the prius and her rental car.  She bundled up for the cool temp and was very comfortable.  I made sure that she could watch the stars while in her hammock by putting the binocs on the parallelogram mount.  Her sleeping situation seems very nice, but I like a cot. 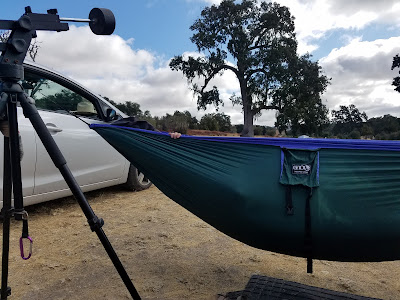 Wednesday was the official first day of Calstar XX and a crowd of the usuals showed up.  Anthony and Isabel pulled in that afternoon, excited to start their own film astrophotography.  I gave Isabel some rolls of E200 to use.  I’m trying to finish up the last of my supply now that I know the new E100 shows good sensitivity to Ha.

On Wednesday night, the second G11 was put into service after I moved the Takumar 400 onto that setup.  This allowed the first G11 to run the 400 EDIF and 300 EDIF with color film and I could concentrate on black and white targets with the second.  The second mount also held the Pentax LX on the SV70 ED.  This camera was loaded with E100.

Moving the big lenses around left me with a mistake that wasn't corrected until after midnight.  I'd left the lens cap on the 400 EDIF, exposing the precious E200 to nothing.  In the end, I wasted about 4 shots plus the ones from the previous night.  I may have wasted half the roll of the 220 film.

Late on Wednesday, I put the GM8 into service, using it with the Comet Catcher scope for some visual fun.  I brought it in the event that I wanted to put even more cameras on the mount or possibly if Isabel needed additional camera space.  This wasn’t required so I was free to try other things.  I also tried putting the digital camera on that mount and shooting interval shots at 300 mm just to see what I could get unguided.  Alas, the gearing on the GM8 is pretty sloppy still and requires guiding to eliminate the remaining RA tracking error.  I returned the Comet Catcher to the GM8 and only used it to confirm targets and otherwise poke about the sky while the long exposures did their thing.

In the future I may yet still put something on this last mount for picture taking.  Wide field digital would be good as well as some film.

Scott Farrar arrived on the next day, just in time to see Anthony and Isabel away as they had to return to San Francisco as a bid they’d put on a house had been accepted.  Exciting news for them as they are first-time house buyers.  We wished them luck and they were gone.

Here’s what the campsite looked like on Thursday evening: 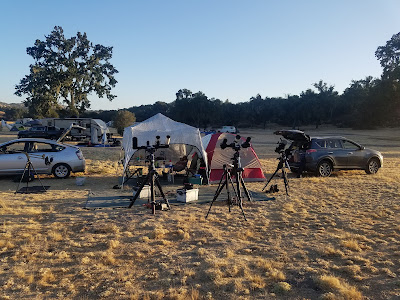 Farrar can be seen sitting under the easy-up.  From left to right, the G11 hold:

Thursday’s weather changed from the previous hot days to a cooling trend.  A cold front had pushed through the area, bringing clouds, dew, and windy conditions.  Daytime temperatures barely reached 80 and the night temps dropped quickly to the low 50s.  Thursday night the clouds became a solid mass at midnight and on Friday night was socked in at 11 pm.

On both evenings I did have the chance to shoot a few hours of film on both mounts, gaining slow progress towards the goals.

The extra sleep provided by the cloudy weather was welcome and I was glad to have the rest.

The last night of Calstar XX on Saturday brought the event to a close with a bang.  Clear skies all night long with cold temperatures dropping below freezing gave reason to push through as many frames of film as possible.  I finally retired at 3 am, shivering with the cold as I’d become thoroughly chilled from the exposure.  If I had my wits about me, I would have gotten into the Prius and turned the heat on, as it was already running and I could easily have warmed myself up.

Packing up the final day was very easy with two extra people to put away the tent, cots, EZ Up, and tarps.  I could concentrate on packing the astronomy gear.

I have two partial rolls of astro film that’s waiting to be finished.  About 8 exposures remain on the E100.  There’s another 5 on the 120 format Portra 400.  While I’d like to get up to Montebello to finish off the rolls, I doubt that I’ll have enough energy to make the trip.  Instead I may just make some portraits on these frames so that the pictures can be developed.