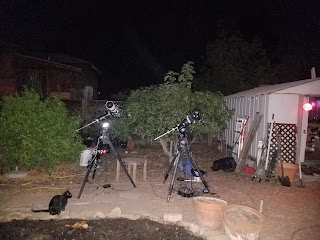 I set up the GM-8 mount with the SV4 for visual use. Put the GM-88 right next to the G11 since I knew that Mars would be easily visible in that location. Got it balanced and wired up for power before we ate, then resumed after dinner. I forgot about the orientation of the dovetail plate knobs and so had to flip it around. I had forgotten the proper configuration to getting the most out of the barlow/powermate and eyepieces, so I was chasing in-focus for a little bit.
Eventually, I found that I had to use a 1.25 inch mirror and barlow after the mirror (rather than the power mate before the mirror). This allowed the system to come to focus. Using the combination with the 7mm Nagler yielded 185x power.
Since I'd taken the time to properly polar align, the GM8 and SV4 telescope kept the planets centered even at this high magnification. I set up the small table for Sara to stand on and others to sit since it's always easier to have something rest upon rather than do "refractor yoga."
Started with looking at Jupiter, then switched to Saturn, and ended with Mars. All the time the Mak was available for imaging with lucky seeing. Recently picked up the ZWO ASI 178C color camera. With 2.5 um pixels, the camera is oversampled for the Mak and the sv4. This means that it gets the most data with little extra glass involved. I considered putting the webcam on the SV4 but did not. Instead, it stayed on the Mak all night.
Ducked into the shed to show them the live video feed of Saturn while I recentered. It was a great way to show how to train the eye to pick up detail in lucky seeing. Maki was able to figure it out really fast. She then explained to Jamie and the girls what to see. When they looked at Saturn, they were awed of course. Jamie had not seen it before and made the comment that it looked unreal to see it with his own eyes. He and Maki spend a good long time at the eye piece, taking in the view, and probably struggling with using their phones to get the picture. I didn't care, because I was having a good time talking with the girls and held Sara for a bit. Nemo the cat also showed up and demanded attention and that was wonderful as well.
When switching to Mars, I prepped the kids with the map so that they would try to figure out what part of the planet they were seeing. The map was provided earlier in the day from the TAC alias and was a perfect addition. They could look back and forth at the telescope and the map, trying to figure out what they were seeing.
It helped Maki to view the example picture from the previous day to grok how Sytiris Major looked. Once she saw it and rotated the map, she was eager to get back to the eyepiece to try to figure out what part was facing us. Mika came out when Mars was being studied and enjoyed the view as well.
The evening ended with a quick look at the Pleiades with the Vixen "owl eyes" glasses. When prompted the japanese name of the asterism "subaru" she was very happy to make the connections. It's notable how when Maki gets excited she breaks down into her mother tongue.
Warm hugs all around, the whole visit lasted a little more than an hour.
Mars planetary