Some success with the Mak project 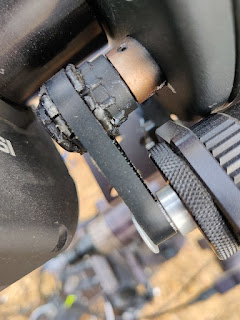 With a series of long clear nights during this early June 2022 new moon cycle, I've been able to get some success out of the Mak project.

Focus was a largest challenge that's been finally conquered!

In the past, I'd struggled with focus and backlash.  One of the final experiments in a previous season noted that the drive belt slipped on the knob.  I solved this problem by cutting a spare belt and adhering it to the knob to provide a meshing surface.  A couple of rubber o-rings act as "guide rails" to keep the belt from wandering.  This provided a solid, no slip connection that is more tolerant of belt tension.

@focus3 is still the best solution that I've found for the setup.  The ability to program a huge backlash amount is critical.  The backlash settings in CCDAP and the focuser driver are limited to 256 steps.  The moving mirror design of the mak requires a large setting of 620 to 730 units.  This is partly because of the mirror backlash and also because of the gearing ratio of the knob vs the Handy Stepper Motor.

What's very important to the focus routine is to have a bright enough star that's not too bright, relatively centered in the field of view.  Anything else leads to failures.  The ideal solution would be to set the focus star based on an automagic search like @focus2 does.  However, there is no routine that does this.  An approximation must be done by shifting the star selection process to the CCDAP target list.

Once I'd selected a nearby HIP catalog star with brightness of Mag 4.5 to 5.5 @focus3 and CCDAP would process properly and return consistent results.  It was important to start the exposure range low enough so that the max value would stay below 64000.  Keeping the exposures of a Mag 4.5 star below .5 seconds was critical to this process.  Programming the focus to happen between cycles of the M51 target, I was able to ensure that proper focus was maintained across the night.

Yes, a lot of time was lost between the plate solves moving between targets, but this turned out to be a non-issue after time because the computer has infinite patience and can make use of the clear skies in the wee hours during the work week.  After 3-4 nights, the data set had 12-16 of each color and luminance that passed data evaluation.

For calibration files, new darks and bias were taken during a cloudy night.  Then I was able to use the new flat panel on the dimmest setting with a paper sheet to diffuse the light for the flats.  Daylight flats would never be successful most likely due to the slow F12 ratio.

Once I'd collected the calibration files required, it was relatively easy to process in PI with the weighting script.  This generated clean masters that had good signal.  There are gradients in the light pollution, the masters require running DBR in PI.  And because I have forgotten how to process LRGB images, I will have to familiarize myself with the proper steps.

Lastly, even though the focus is good-enough, I need to check collimation again.  I have seen that there are some odd shapes in the airy disk as it cycles through focus.  This could be from the camera sagging, the dew shield being off-round, or the mirror shifting.

The best way to properly understand how to collimate this scope is to open the back by UNSCREWING it.  The whole back will unscrew from the tube.  Once it's removed, the push-pull screws are easily identified and the interior surfaces can be cleaned.  The scope really doesn't require an o-ring, it's just a dust seal that goes along for the ride. I think that the next time I check the image, I will attempt to collimate with the QSI camera in place so that it can be properly adjusted for the weight and focus.