During the GSSP 2022, there was an opportunity to get an interesting lens that may be ideal for astrophotography. 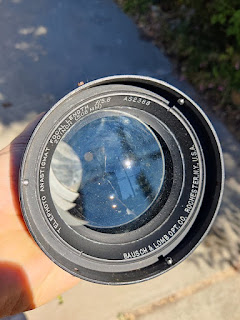 The Bausch and Lomb 508mm F5.6 lens was designed for use in aerial photography.  There are aperture blades, but no shutter.
The version that I picked up at GSSP also has no coatings and has some separation in the rear element.

Within a week after returning from the star party, I'd asked my co-worker to cut a hole in a Luland board to hold the lens.  Tony was able to make the cut and return the board to me by Friday.  Working at Olander has the benefits of being able to select the perfect hardware for the job.  10-32 x 5/8 long screws were the ideal length and we had blackened zinc in stock. 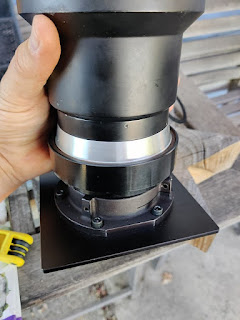 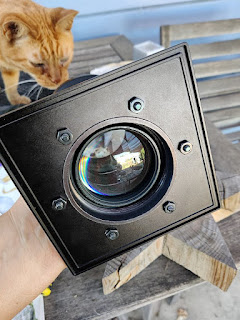 The lens looks crazy hanging off the front of the Horseman.  I can see the sag in the standards from the weight.  There will need to be some kind of lens support for this beast if I expect to use it for astrophotography. 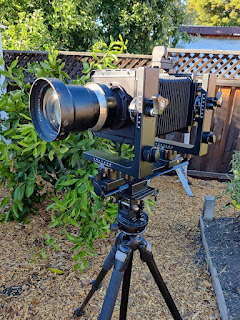 Was suprised that the standard 400mm rail has enough room for proper infinity focus.  I tried viewing the daytime moon and it was easy to hit it.  On the other extreme, even without changing the rail there's enough room to allow close focus of 15-20 feet.  I'm sure that a longer rail the setup could be used at much shorter distances. 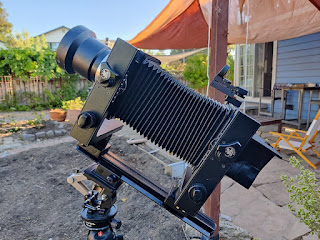 Shortly after returning from the star party, I was doing research on the 508mm lens and found a later version that had been modified with a shutter.  Of course, I had to get this as well.

Now is the challenge of trying to modify the modifications to put it on a 140mm board.  Again, it's good to have co-workers that are skilled and have a lathe since cutting the 82mm hole requires more skill than I have.

Lastly, I found that Luland makes a lens support.  Of course, this is a perfectly timed offering since I needed to buy a few more supplies.