Aperture Matters - Getting to First Light

On Saturday, I got back to work on the Aperture Matters project. 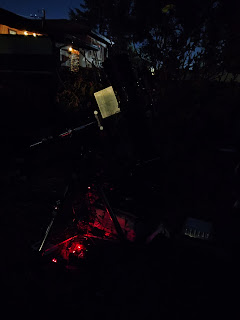 But first, the back story:

When I started back on the project on Saturday afternoon, the epoxy had set properly on the bellows frame.  It was bonded to the ring and to the riser just as expected.  Neither will move now until it's wrecked.  I'd probably have to soak it in acetone and hack at it with a blade to separate it.  This is good because the bellows pull on the frame especially at zenith.

The bellows end needed slight modification as well since the clearance on the frame was reduced.  Dremel tool was used to provide clearance and they snap in place now.

Then I made a double layer of black felt and black craft foam paper to be the light seal between the frame and ring.  Wrapped the extra material around the edges to ensure light-tightness.  A combination of adhesive and hot glue was used to tack it in place while it cured. 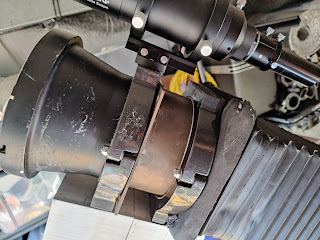 In order to do this properly, I removed the lens to do all the fitting and then struggled to get it back into the rings.   What a heavy beast!

Afterward, I put the guide scope and red dot finder on the top of the assembly.

Mounted the whole thing on the GM-8, wired up the dew heaters and guide camera, and waited for dark. 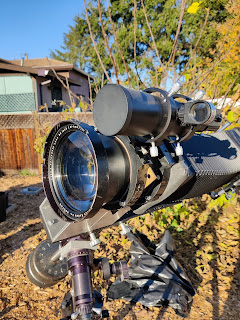 A quick trip to the store and I picked up an 8 inch square aluminum pan that's used for leftovers.  This would become the shutter for backyard testing.  $7 for three pans, much cheaper than other solutions.  Bummer that it's square, I'll eventually have to find a circular cake pan to modify. 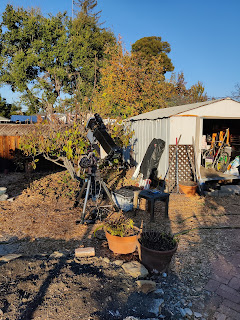 A crescent moon was low in the sky which made it easy to align the finder and guide scope to the same point.  The moon was a good target for getting focus as well, since it is so bright and the edges of the terminator are crisp and sharp.  Could readily see some of the alpine regions near the mares.

Slewed to Vega, checked focus with the loupe and was satisfied with centering and focus repeatability under the loupe.  Did not see purple fringing on Vega with the 6x loupe.

Trained PHD2 in the east, then started tracking on the target for first light.

All shot on Fomapan 200.  This film has poor reciprocity characteristics which works to the advantage of the testing - I can run a long exposure for tracking purposes without having to worry about sky fog.

Previous backyard testing was with TriX at 10 to 20 minutes at f5.6.  Given the reciprocity stats of TriX, this would have been a metered exposure of 1 minute.  Plugging these values in for ISO 200 and the loss of an F stop, the calulator suggested that the Foma needed an exposure of 87 minutes to match the TriX.  This is why I opted for the 60 minutes as the exposure times for first light in the backyard.  Should come close to sky glow limits while not keeping me waiting for too long.

Could have developed the film on Sunday, chose to wait and to put the scope away as we'll be facing another bout of rain coming this week.

The GM-8 mount tracked very well, given the over-loaded state of holding the big assembly. 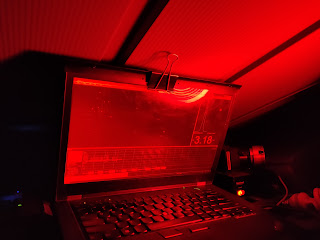 I've not weighed the setup yet, but from the heft, I would estimate 35-40 lbs.  The GM-8 has the gearbox upgrades and I've lowered the slew speeds to reduce the stress.  Guiding was great when pointing to the west.  It was not as great when pointing to the east.  PHD2 log analysis shows the scatter plot on the east as being wider with more RA corrections.  I believe this would be from a lack of east bias.  Most of the RA moves were to the east during these exposures.  Future use would probably be on a G11 and I have a solution for constant east bias for those mounts.