Over this thanksgiving weekend, I've been able to work on the "Aperture Matters" project.  Unfortunately, this is due to my partner being unwell and thus we were not able to celebrate the holiday with family.

Quick recap of the project:

After the Golden State Star Party, I began to look at aerial lenses for large format as a way to complete the set for 4x5 film work.  I'd picked up a couple of 508mm f5.6 lenses and was looking for the elusive next step.

I found that lens in Stockton for a decent price and got it sent to me.  I knew it was a monster before I received it and when I finally had it in my hands, I also knew that it would require much more than just mounting a lens in a board and popping it onto the Horseman 4x5. 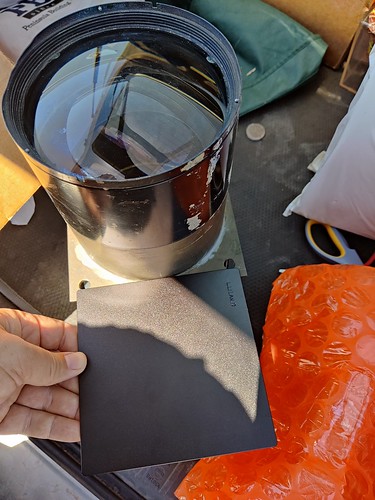 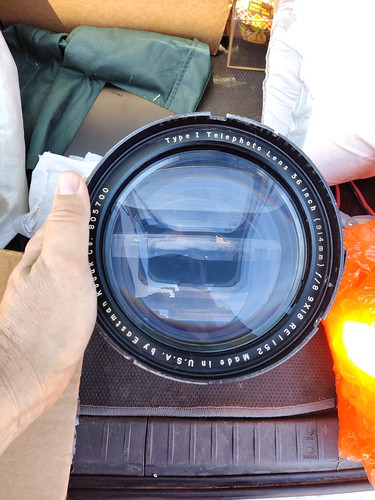 The project required a few steps:

With these requirements in place, I was able to continue the parts list.

The 24 inch Losmandy plate is the longest on the market.  Advantage is that it has a mess of holes already drilled.

Toyo rail tripod mount source and received.  This is the part that would adapt the round rail to the Losmandy plate.

Toyo rear standard sourced and received.  This included the critical focus bits!  The movements are still geared, so there is precise control.

Toyo bellows support sourced (ebay) as the part to hold the front of the bellows up near the lens.  This was going to be taken apart as I only needed the frame.  My initial source failed to send the parts to me so I got it from another place.

Toyo long bellows sourced and received (ebay).  During a trial fit, I found that additional material would need to be ground from the inside of the bellows frame to drop over the back of the lens.  A dremel tool and patient cutting was the solution.

Toyo rotating spring back sourced and received (ebay).  At the time, it was the only complete ground glass back I could find.  The rotating function is nice but it does add more depth from the standard to the film plane.  This makes the plan of using another guide camera for focusing need additional depth.

Toyo lens board sourced and received (ebay).  The additional depth required for the digital camera focus means that I can't just mount a Lodestar in the hole like the Horseman project.  Instead, I'll need more flexibility.

2 inch eyepiece adapter sourced and received from Agena Astro.  This will fit into a 2 inch hole that will be cut in the lens board.  I thought that I could drill the hole myself with a 2 inch hole saw, but that required hands of steel and I've opted to give the task to Tony to put on his lathe.

Because of the increased height of the Toyo film plane, the center of the lens also needed to be elevated.  This presented a problem of rigidity.  Parallax was not able to make rings that had the additional height built into their shape.  I opted to get rectangular aluminum tube.  4 inch by 6 inch rectangular tube with 1/4 inch thick walls of 6061 aluminum were sourced from MetalsDepot.com and received.  I felt that these risers would be up to the task of holding the system at the odd angles required for astrophotography.

Putting all the parts together required hardware.  Olander specializes in all the fasteners I could ever want, so I got them at work. 😀

All these bits and parts arrived during August 2022, just prior to my travel to NC to help my sisters care for my father during his final months. 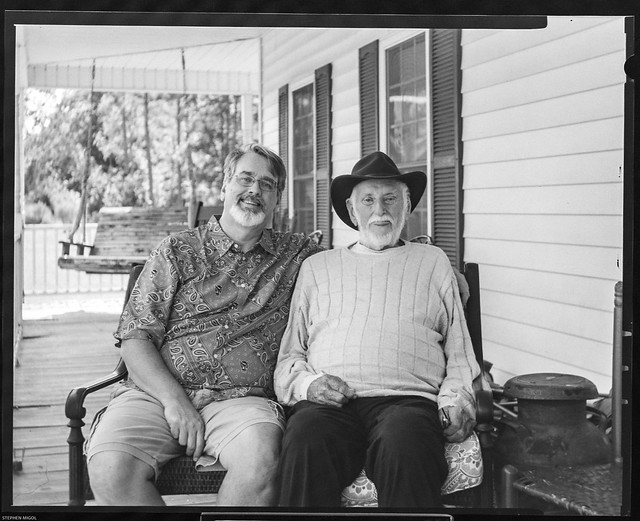 Fast forward to November 24.  After re-assembling the G11, I was ready for another project.  I decided to drill the risers.  In order to do this, I needed to mark the holes, which meant putting the bits together.

Here I have placed the lens on the rings and onto the risers.  I'd hoped to have some space between the two aluminum boxes.  In the end, no space was needed.  In retrospect, I could have used a single, longer box and saved some drilling and the expense of getting the cut pieces. 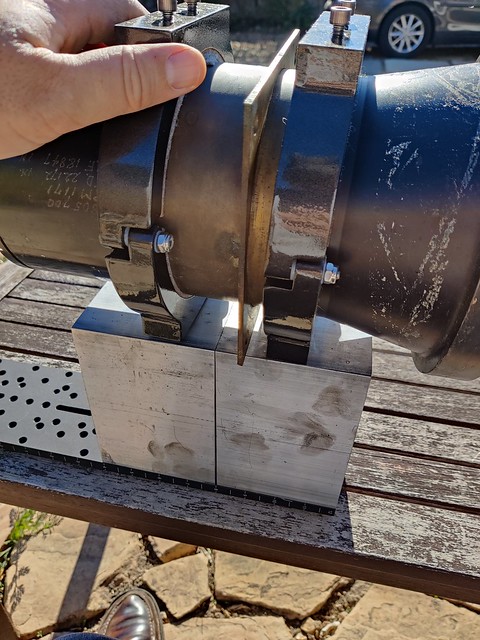 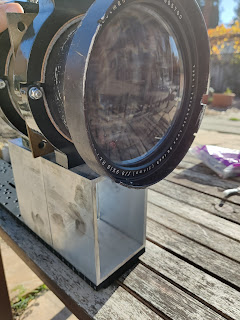 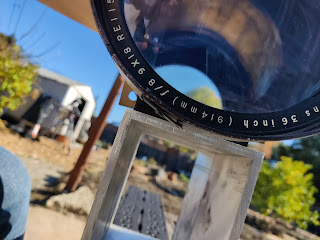 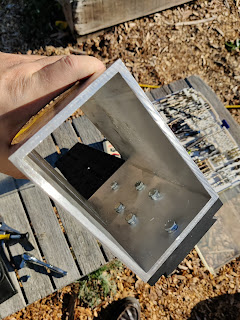 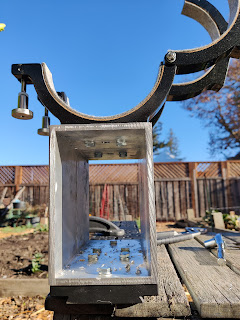 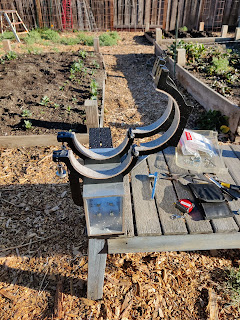 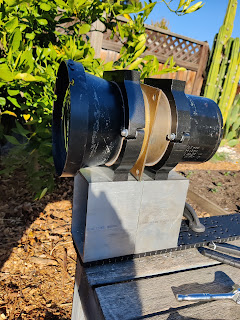 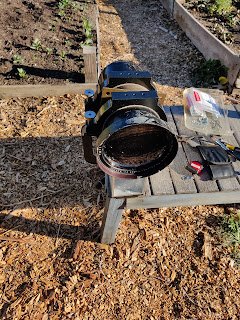 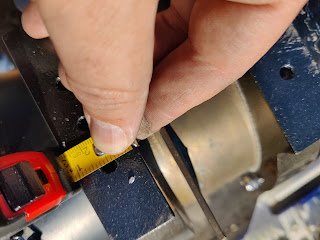 The above sequence shows the steps I went through to drill and mount the risers and then the rings.  I broke one drill bit with a pilot hole with being too hasty. Also, my marking of the holes left a little too much error on two spots I had to drill out a larger hole for each.  I broke a small file trying to make the hole oblong. 😒

Mounting the rings was easier as the holes were in a line and didn't require much thought.

Hardware used was 1/4-20 hex head screws, a mix of 1/2 inch to 1 inch long.  The hex head allowed me to use a small ratchet wrench in the tight space.  The slightly larger than required holes for the rings will allow small movement of the lens to line it up properly.

Putting the rear standard on the rail was a breeze compared with the lens.

Breaking down the bellows support, I was able to slide it under the lens and put it on a temporary fit with some adhesive.

At the end of the day, the project had come along very well! 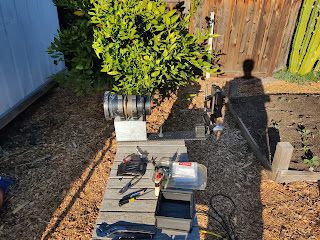 Next day, I fitted the bellows.  It was a tight squeeze underneath the lens.  I found that if the rings were raised the thickness of just one washer, there would be enough room for the bellows support frame.  This was done before using two-part epoxy to fix the frame to the rings.

Putting the whole system on the GM8, I was a little worried about the total weight.  I put a second 21 lbs weight on the bar and found that the rig would balance with the weights only half the distance down the bar.  This was a nice sign that the whole thing would work well.  Also, the front-to-rear balance is at a reasonable point.

I noticed the long bellows sagging and this will require some support to prevent them from moving during a long exposure.  I will make something eventually, probably a piece of aluminum sheet that can be folded to the right height. 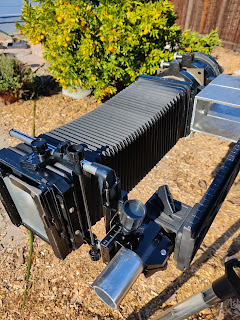 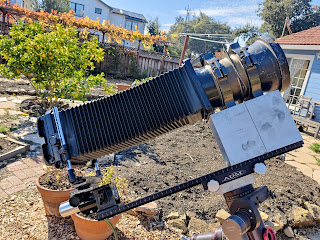 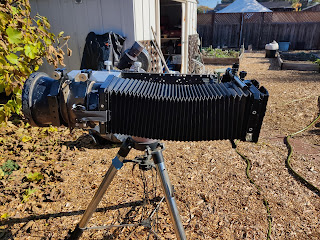 There were few clouds in the sky.  I found a little bit of wispy cirrus and was satisfied that the infinity point could be reached.  The Toyo focus system worked like a breeze!

A few moments later, I was treated to the sight of two jets crossing the sky at height.  This was the perfect opportunity to get a short video from the ground glass.  I am pleased to see that there was no visible purple fringe.  The edge of the ground glass got a little blurry, there are a lot of things yet to do to improve the image.

I cleaned the optics and then opened the lens and cleaned the insides.  It's amazing how large this lens is.  I can fit my entire hand through the center to clean the inside of the rear cell.  During this operation, I flocked the exposed brass surface. 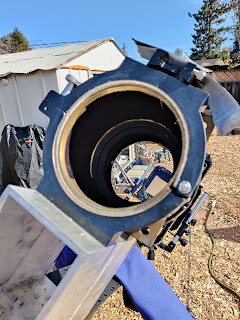 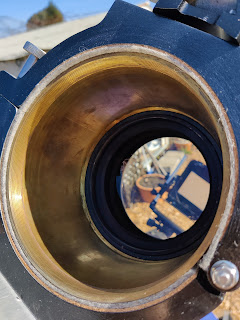 Project an image circle at infinity (hopefully without bellows) to properly see the size of the circle.  This SHOULD allow me to center the circle on the ground glass by moving the rings as noted above.  I understand that these aerial lenses were built to work on 9 inch roll film, so there should be a lot of field to use.

Once the epoxy cures at 24 hours, I'll be able to figure out something to block the last of the light coming around the lens body and the bellows frame.  Quick solution is to drape a cloth over it.  I will eventually cut some aluminum sheet to cover the gaps.  Flocking and felt should work well to block any light gaps.

There is no shutter on this lens, so I'll need to make a lens cover.  At the moment, I could use a pie plate or knit cap as a shutter.  Something light like this will work for the astro shots.  I never expect to use this setup for anything other than the task, so having a proper shutter is not needed.  I'm looking at something to cover the front element for protection.  I may use an aluminum cake tin with felting.

I may want to do some preventative bellows patching on some of the worn seams.  Alternately, I could order some brand new bellows from e-Tone.  Patch solution from Bostick and Sullivan requires 48 hours to properly cure.  Will be an easy step to do during a full moon.

The digital focus device requires the 2 inch hole in the lens board.  Will also require a Lodestar to mount.  I currently only have one color Lodestar, so I picked up another black and white from Astromart.