Got inside the new-to-me G11

I finally had the chance this afternoon to do some work on that second-hand g11 that I picked up at GSSP.

Whoever had this mount earlier did a horrible disservice to themselves.

As far as I can tell, the mount was disassembled prior to use and all the original Losmandy grease was replaced with automotive wheel bearing grease.  It had that unmistakable reek of sulfur.  Sticky mess, too.  Somehow they thought proper practice was to pack the worm gear with the stuff.  I can remember packing wheel bearings on the VW beetle and this is probably what the user must have considered appropriate.

In heat and cold cycles the grease had migrated to the nylon pads.  This meant that there was terrible "push to" function.  To combat this, the user had tightened the RA and DEC axes impressively, making it a real chore to break them loose.  The grease went far beyond the pads.  It worked its way around the axes, underneath and between practically all the moving surfaces.  This sticky grease was also slathered on the pin bearings inside and on the RA and DEC shafts.  It was embedded into the worm gear assembly, making these normally sealed bearings gummed up and unable to move.

If the user had powered this up during a warm summer evening, it would have tracked well so long as it was locked down.  Unfortunately, once the mount started to cool off,  the grease would have become stiff and likely the whole mount would seize.  I would not be the least bit surprised if the original motors had cooked. 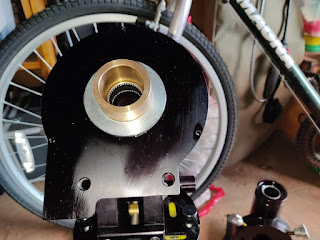 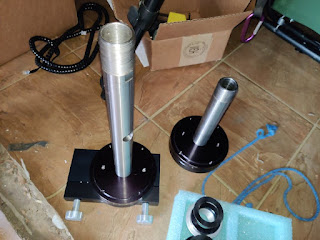 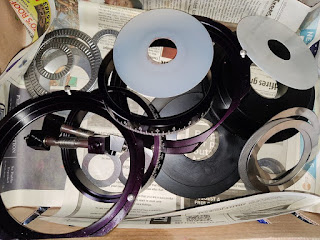 As it was a cool day, not reaching much into the 60s, the mount was already stiff.  I knew something was up when I wondered where was the loose, floppy problem that I'd noticed at GSSP.

I opened it up to start the conversion to go-to and that's when I found the worm gear packed with the grease.

I broke the whole thing down, dumped all the bits into a basin and sprayed the whole thing with engine degreaser.  The grunge was slow to break down.  Had to use several shop towels to scrub out the goopy mess.

During this time I found that the ring gear had not been used enough to wear the anodizing!  This is what makes me think that the mount has never been really used except to disassemble and repack.

All the parts are now sitting in the shed on newspaper, waiting for me to get the chance to return to them.  I might have to re-degrease them with new chemicals and fresh shop towels.

Once this is done, I can put the superlube on it all and start the process of re-assembly.