January 31, 2013
I've been interested in Astrophotography for some time.  I got an extra body of the same series DSLR that I use and had it modified for full-spectrum use to get better images of the night sky.

I even added a peltier device cooler to try to chill the entire camera to get better noise characteristics.

Recently, I've decided to take some down time and improve the performance of this cooler.

I'm not terribly happy with the power requirements of this setup and wanted to get better results.  So, I started looking at what could be done to improve the heat transfer out of the camera.

Here's how it looked when I first started using the cooler: 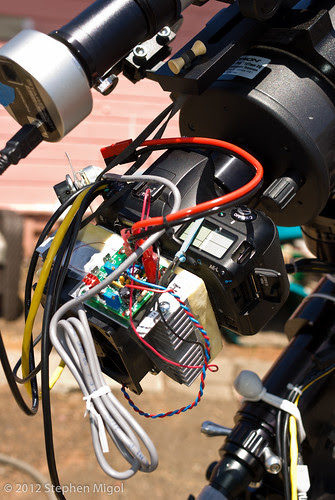 Shortly after I started with this configuration, I wrapped the gap between heat sink and camera with an old wool sock to give insulation.  This has helped stop the formation of rime ice at the edge which is an indication of wasted energy.

9 months later and I'm getting back into it again.

I looked at the way that the heat is transferred around to the bottom of the camera as seen originally in this photo: 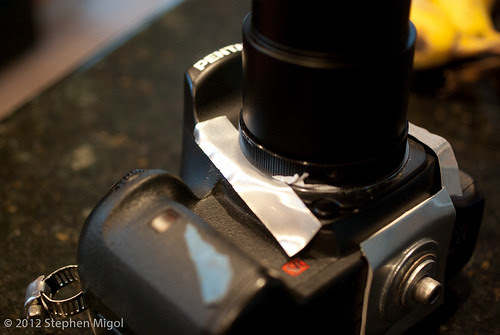 This strip of aluminum allowed the cooling to get to the base plate. Of course, this is still outside of the camera with the hopes that some of the heat will still leak out through the plastic.

When I saw this picture in the Pentax K10D service manual, it got me thinking about what was going on inside the box.

The metal plate that has the yellow box is holding the CCD plate.  It also holds the magnets for the shake reduction system so there is limited direct contact with the CCD.  You can see this separation better in this next shot: 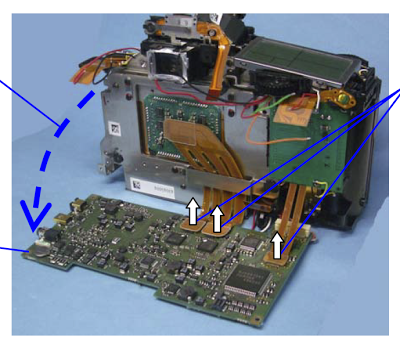 There is a gap between the CCD assembly and the metal box.  Still, it got me thinking about what I could do to help assist the cooling of the critical components.

I opened my camera, breaking the seal that had been put in place when the IR modification was done.  It was long enough and Spencer's hasn't been responsive to my questions, so it was up to me to make the changes.  It also didn't require any de/re-soldering of wires, so I felt comfortable with making the effort.