Flexure and Other Gremlins 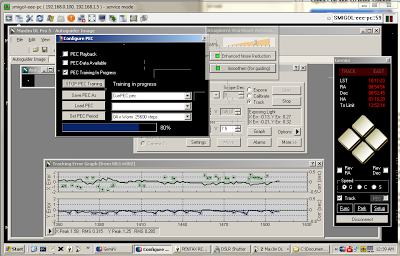 What a day and night!

Earlier during the day, I did a sweep of nuts and bolts and screws on the scope to see what might need tightening.  Here's what I found:

In the evening, I put the scope to work right away.  Of course, focus was off, so I'll get very limited data from that period.

I did see several instances of the laptop acting up.  It lost connection to the camera a few times and lost connection to the guide cam.  Two things were happening: I had secured the camera cables with a plastic wrap tie and as things got colder, this strained the plugs for intermittent connection.  The guidecam was a bad USB cable.  Swapped it out and all is OK.  This is the second USB cable I've lost like this.  I think I'll have to re-route the cables once I'm happy with how the setup will work.

I also tried running without PEC just to see what is going on.   It appears that PEC does help, but not as much as guiding.

I tried re-programming PEC using the control panel and the 4x graph shows an interesting trend: 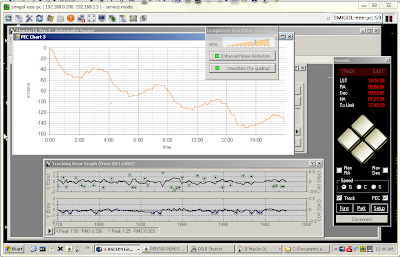 Note how the curve descends over time.  This is the indication of the trailing of the mount near the meridian.  Very interesting!

Makes me think that since this is seen via the guidecam, then there is an issue that effects the guidecam or the whole setup.