February 10, 2013
As a part of the modifications to the camera, I've opened up access to the tripod socket.  This had been obscured by the wool sock in the past.  Now that I've made the configuration a bit easier to use, I can attach the camera via the socket.

This meant that I had to fabricate a small supporting bar from some of the aluminum bar that I had around.  I also had to put a gentle S shape into it to allow clearance past the Losmandy ring set. 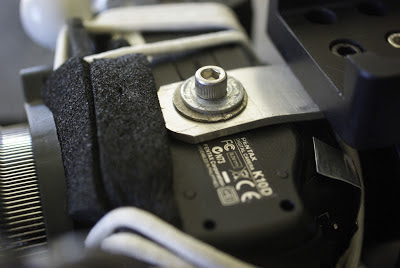 The way it looks now is that the camera rides on the Losmandy dovetail ring support and that device also supports the front of the camera via the ring on the flattener.  This gives full support, front and rear.

Also via this method, there is no issue with the weight of the cooler.  Thus, this is a possible moot point.

Last night I did some testing on the stars.  I wanted a target that I could follow for most of the night and I used Sharpless 290 (SH2-290).  It rides nearly through the zenith.

What I found was interesting.  The flexure that I expected to be gone was still there!  However, in looking at the offset computation via DSS, the flexure was all while the target was high in the sky.  Once it got lower, the flexure mostly disappeared. 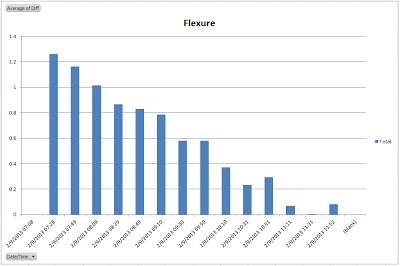 To me, this means that there was something bending strongest when the scope was fully over on its side.  This leads me to think about the rings again.

As I think of the dynamic of the system, when the scope is pointing at the zenith, the guidescope is out at the end of a long arm.  If flexure exists between the SV4 and the SV70ED, then the guidescope may lean outwards -- trailing -- behind the main scope position.  This means that from the perspective of the SSAG, it's pointing behind the star in RA.  Thus the motors are run faster to "keep up".  The end result is that the stars run fast and slowly creep out of the field of view of the main camera.  This is pretty much what I see.

I've spread the SV4 rings as wide as I can.  This added a bit more space between them - about 5 inches.  They're nearly the full length of the dovetail bar.  There is no real support between them, however.  Not sure if there should be.

I did recenter the SV70ED and tried to straighten out the tube a bit.  I removed the ring clamps from the guide scope.  Now I'm considering putting them back in place.  I don't like how they throw off the alignment.  I am considering swapping the position of the rings to see if the ones at the back would be better in the front or vice versa.  Another possibility would be to replace the screws with bolts with no soft tips.  Or maybe getting a better set of rings (ADM/Losmandy) rather than the set from SV.  If I went with ADM, I could get a longer bar at the same time and maybe the rest of the kit to support the camera on the Mak.

At any rate, there are two other options to consider:
CCD flex in either the SSAG or the K10D.  The sensor in the K10D is designed to float as a part of the SR.  Because the direction of movement is at right angles to the lens axis, I'm thinking that the DSLR is not at fault because the flexure graph would be greater at lower angles as gravity would be pulling along the axis of movement.
The SSAG has a known problem of having a movable circuit board.  It would be possible that the hardware inside is flexing as the scope swings across the sky.  It could be the pressure of the cable on the camera or its own sag causing the issue here.  I will secure the USB cable better and maybe move the SSAG support to the camera body.

I looked at the tilt over time for the K10D and this seems to bear a bit more fruit: 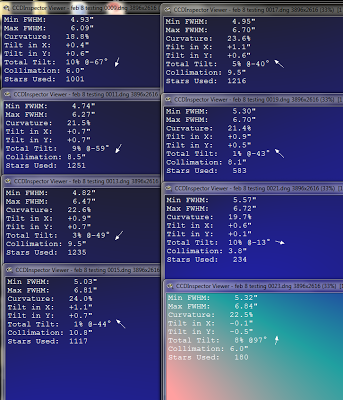 Note the total tilt numbers.  The last two frames seem to be outliers as the camera was pointing pretty low in the sky.

I refocused again tonight and was surprised at how far out the focus had traveled, so some of this might have been due to these issues, too.  I also tightened the various screws and some were a bit loose.  Much of this could be due to metal shrinkage when near 0C.