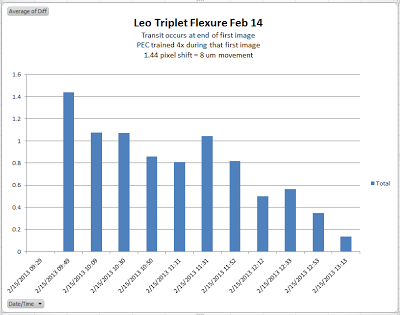 What's going on in this graph?

The amount of flexing that is happening during this bad frame is 1.44 pixels.  This is about 8um at the CCD surface.  There is no way that I can measure this error except by imaging.

Note that the RMS values on Maxim during this time were .3 pixel (at 2.55 arcseconds/pixel), which should be about .76 arcseconds - or just under half a pixel at the DSLR surface.  This means that it should have been enough to fix.

Also note that the drift of the PEC during training seems to indicate that this rate error is seen across the whole mount, not just at the DSLR.  Thus, I point my finger at the computer or hardware.  One possibility for a fix might be to clean the clutch pads on the offhand chance they may be dirty.  I'm reluctant to take apart this mount because it would be a pain to get the gear spacing correct.

I'm thinking again about the PEC.  I will re-train it again tonight - as it goes over the meridian.  I will identify a bright target and set the guidecam to pound away at .5 second intervals or faster.  This should take about 30 minutes. As far as I can tell, the Gemini system seems to handle up to 26 steps per second.  Thus, sampling even at 2x or 4x a second would not be a problem.  What would be a problem would be having the laptop chew on that much data!

As an aside, I finally figured out how to do plate solves with the setup.  Now there will be no more problems with retargeting after a meridian flip or from one night to another.  I'll just need to remember to save a shot from the SSAG and representative image from the DSLR.  Doing the plate solve and then syncing back to the Gemini is actually pretty easy.

To do tonight:
Possible mechanical things to do:
Not sure what else I can do.  I am hoping that the retraining of the PEC will fix the issue.
Astrophotography flexure