SH 290, a photo by S Migol on Flickr.
Via Flickr:
SH 290 as seen from the nights of Feb 8 to 17 2013 in the back yard. This is from a stack of subs collected to test flexure. I'd selected this target because it crossed the meridian at a time when I could get the scope set up and let it run. I was more interested in seeing the trailing of the stars and if I managed to get some nebulosity, great.

I threw a stack of subs at DSS to see what would stick and it gave me 76 that qualified for a total of 25 hours 26 minutes of integration time.

As could be seen from the earlier screenshots of the PI window, there was some data visible but it was hiding deeply, just above the skyglow. The real challenge was separating the useful data from the noise.

In the end, I went away from my normal habit of using the masked stretch script and used the auto histogram tool. That helped pull the lower regions apart so that I could gently nudge the colors from the background. The atrous tool was used to aggressively control the noise -- and it worked well.

I think the annotated image really surprises by showing all the galaxies lurking in the background that I would normally cover by sending the background darker.

I think that this has taught me that there is still lots to see from the back yard. The 20 minute subs seemed to have helped. I could have gotten better contrast by going to a darker site. A more aggressive light pollution filter might have helped but it would have left more noise.

Also, there are some uncontrolled dust motes because of missing flats. Not unexpected given the way I was messing with the camera during these sessions. This was done just after I'd modified it and put the new cooler in place. 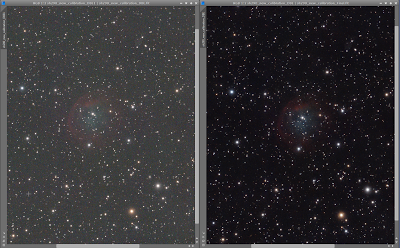 This is the dimmest thing that I've tried to image.

It's Sharpless object 290, as seen from the back yard.  It's from a collection of data that I gathered while going after flexure.  It was well placed for testing at about 9 degrees Dec.

The stack is a collection of 76 subs at 1200 seconds each at 100 ISO.  The weather conditions varied with transparency and temperature being good and bad.  There are frames in the stack that have great FWHM numbers and awful ones.

In the end, I ran this stack through my normal routine and was unimpressed with what I could do.  It's simply a dim object lost in the background skyglow.  It was only with adding a few more nights of data and then learning another tool or two in PI was I able to get anything.

It's ugly.  But at least it's done.  And it shows the limit of what I can do from home with 25 hours of integration time at the limits of visibility. 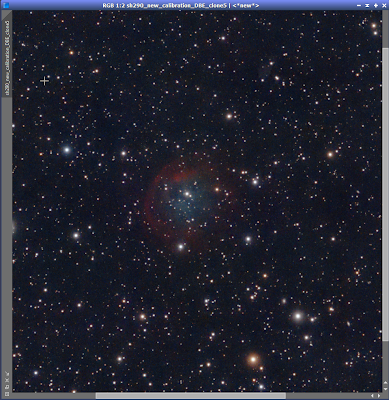 I returned to the history of the previous image and reworked the curves.

There's still a lot of the muddy, orange background visible here, but at least it's a bit better looking and brighter. I think that this target would look so much better at a dark site or with narrowband.

I really can't push my local conditions to support a longer sub, even at 100 ISO. I think that getting better contrast from the background would be the trick here. 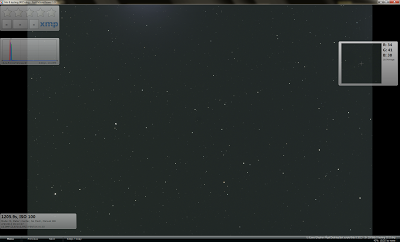 Just to give an idea of what a 1200 second raw of this region looks like.

The camera temperature was reading 4C via EXIF.  Most likely it was a bit colder than that, given the local temp was just at freezing.

Note that the nebulosity isn't visible in the sub.  Also note that the histogram is well past the left margin so the skyglow is the limiting factor.