After nearly two months, I got my gear out under the stars again and went after a nice, near-polar object, M97.  This was partly because I'd selected it as a perk for winning the Cloudy Nights Intermediate Astrophoto Challenge for Feb 2013.

I got my scope up to Montebello on Saturday night - which was a wash because of the clouds and because I left the camera set to ISO 400.  The usable subs for that evening were no good because when I stack with them, they inject noise into the final image.

I returned on Sunday and Tuesday nights for a great session, netting nearly 7 hours of integration.  The final stack looks pretty good so far.

One thing I noticed when packing the scope away on Sunday night was that in the cold, the guide scope screws had become slightly loose due to the contracting metal.  This was a bit dismaying, as I'd tried to keep the system tight.  So on Tuesday evening, I tightened everything down before calibration and guiding.

Given this change, I'm pleased to see that the flexure chart is pretty good! 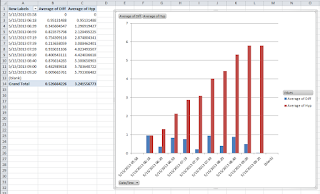 Note the blue bars of the measure of incremental change in the hypotenuse between exposures.  This is the drift between images, causing trailing stars.  Notice how they appear to be mostly less than 1 pixel.  The red bars indicate the cumulative drift over the session.

This averages out to a respectable .3 pixels per frame drift.  Not bad at all and is likely attributed to field rotation.

There was a lot of ground-level wind on Tuesday, so it's likely that the remainder of the problem is masked by induced vibration.
Astrophotography flexure