DSS and the Pentax K10D

July 16, 2013
In response to a question that appeared on the yahoo group for Deep Sky Stacker, I pulled up some old data to check against how the software rendered the information.

A user was comparing how their version of DSS was leaving some jaggies on debayering and showing some residual effects on the stacks.  The example they used featured M13 at ISO 200 and 3 minute exposure duration.


I dug into my archive and found some data close to what they were using.  I found some source files that were 10 minutes at ISO 200 of M17 the Swan Nebula.  Granted, this is not a globular cluster and it's a longer duration.  Still, it should be good enough for testing as there are quite a few stars remaining in the field.

Here's what the output and intermediary files look like in PixInsight: 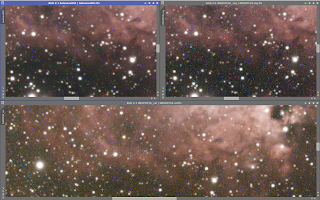 All are subject to a basic Auto STF of the same amount.  All are seen at 200% zoom to show pixel level detail.

Compare to the user's example photos:

Now that I think about this, I believe I've seen this error before.  I think it comes from cosmetic correction being set too aggressively.  It gives these ringed stars that look a little odd.  I'll see if I can find a way to re-create the effect.
Astrophotography Deep Sky Stacker Pentax K10D