While I was pulling the scope on and off the mount recently for the purposes of flocking, I noticed that even with the body of the camera secured with the tripod socket, it still moved when handled.  This is not good!

Obviously a source of flexure, I was wondering how this could still be the case given all the work I'd put into securing things. 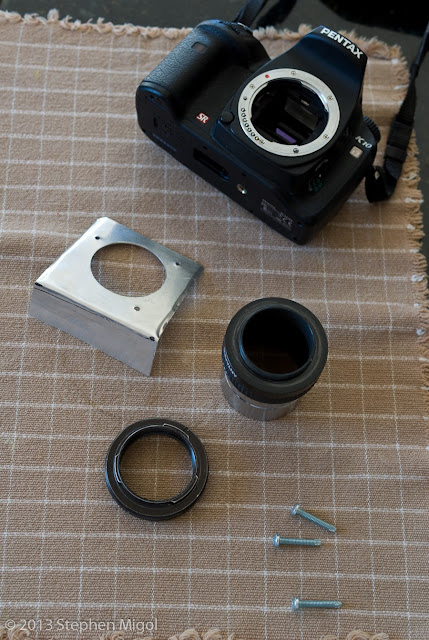 Thinking about the mechanics, all that is secured by the tripod mount is the Roll of the camera.  Pitch is only slightly controlled and Yaw is also slightly controlled.  Looking at the way the image stacks add up over time, I can say that since nearly all movement is in RA, the Pitch is a major culprit.

Continuing thinking of the way the camera is constructed, I considered what could further reduce the potential flex.  I know that the kmount and flange and mirror box all are one unit that connects to the metal chassis of the camera.  Since I haven't had the camera apart myself, I don't know how much is metal.  Still, there's a fair amount of rigidity in the body due to this skeleton.

I'd seen a product online that was a Tmount for a Canon camera that had Pitch and Yaw screws that would press against the surface of the camera.  The idea was that they would take up the slack in the mount flange springs, holding the camera body tightly to the lens.  Of course, no one makes a Pentax version.

So I figured I'd make one on my own.


I got 1mm thick aluminum stock.  Would have preferred brass, but Al was cheap and easy to work.  Drilled a 1.75 inch hole in the metal and deburred it.  This fits perfectly over the 42mm T thread of the flattener.  Allowing a little bit of flange for putting some machine screws through the metal, I then bent the edges of the metal to give a little stiffness.  I would have put the screws on equal thirds around the mount, but there's not enough of a shoulder to allow this position.  Also, the lens release button is in the way!

Everything all put together makes for a slick device.

I did have some challenges with mounting it on the telescope.  The tripod socket configuration I had in place before wouldn't work anymore.  The spacing wasn't enough and the parts wouldn't clear each other.  Also, with the machine screws tightened up, the focuser, flattener, and camera wouldn't line up with the dovetail bar.

In the pictures above, you can see how the holes clear the space around the Tmount.  In this case, the Antares 2 inch adapter is pretty wide, but it still clears underneath.  The self-tapping machine screws press on the edge of the metal flange of the lens mount when they are screwed down.  I could measure how much gap is appearing along the edge for the purposes of centering or leveling.  That may be an exercise I'll have to do before going to CalStar.

That was annoying to have to ditch one method of securing the camera over another.  I can always undo this effort if it seems to not work.

Another thing I noticed was that the Feathertouch focuser was loose on the body of the scope!  Just a quick snug of the grub screws was needed.  I think the heat cycle of being outside in the sun probably worked them loose.  This would likely explain why focus was lost over the course of one session a few days ago.