August 01, 2013
With the weather finally getting nice again, I went back to trying some testing in the backyard to see what I could get out of the system. 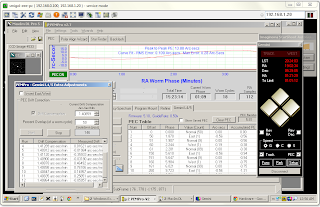 I tried to do the backlash exerciser, but it did not want to stop tracking while slewing in DEC.  I may try pulling the RA cable and try it again.

I also want to try getting good focus with the Celestron guider.  That's something I can do on a photo tripod.

I also want to try using a UV filter on the dslr to see if it reduces the tiny cyan halo on certain stars.

Lastly, I should create a reliable, consistent flat method.  I played with longer duration flats and didn't see any value.  Instead, I saw a color shift towards the brown/reddish color because of the paper used to shift the light.
Gemini 2 Losmandy G11 PEMPro