In order to better optimize the SSF6 flattener spacing and alignement, I popped the SV4 out of the rings and looked at where the DSLR is binding.  There are some issues with the way the camera lines up in the focuser drawtube.  Not only are there problems with the horizontal axis, but there are also problems with the vertical axis.

I tried to match the movement as much as possible.  By using aluminum shims in different places around the tube, as well as on the baseplate of the camera, I was able to get the tubes to mostly line up.  It's a much tighter fit than it used to be.  I believe that this tightness is because of a fine layer of lubrication has caused an air seal!  I removed the flattener from the camera and tried it freely.  The pressure inside the scope is enough to keep the tubes from connecting.

What I'd like to do yet is try some bigger shims on the rings and see what is needed to get these parts to come together easier.

Considering that I've got the camera mostly centered with minimal bias, I think that there should be little skewing of the field.  Currently, the camera slides together cleanly until it hits a tight spot where the air pressure will keep it from going the rest of the way.  It acts the same in reverse, the scope holds onto the flattener tube via air pressure.

Given the in-progress results seen above and the work done,  I'm glad that the final flatness is shown here: 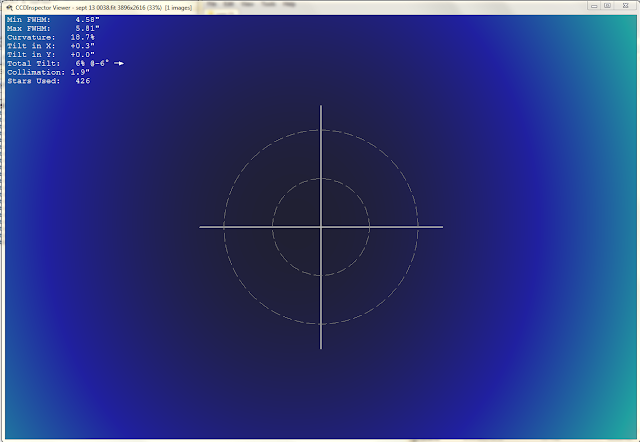 Still, I think the lesson learned is that I will need to check flatness and refocus as needed at the beginning of each session.  There's just too much chance for flexibility, especially if I change filters.

Another thing done recently which will have little practical value under the stars except during setup.  I noticed that the polar scope in the G11 was getting loose in the holder and it had actually come apart inside the mount.  The reason was that the blue tape used on the tube of the polar scope to stiffen it was gumming up and catching on the inside surfaces.  Thus, when the mount would slew, it was unscrewing the parts of the polar scope.  I put it all back together, refocused on the stars, and then I put the devices back together.  I put a rubber o ring under one of the securing rings and that did a nice job of keeping the slop at bay.  I've since used good polar alignment done via drift method to recenter the reticle.  This should go a long way towards making setup easier.


Targets in mind for Calstar:

SV4 single image:
Single image targets fit within the frame of the SV4 and Pentax K10D, about 123 arcminutes by 83 arcminutes.  I already have data on the Pacman and Cocoon nebula so these are optional targets.

Mosiac:
Mosaic targets require more than one frame to show the whole object.  This requires more time for each subject.  It's possible that I may ditch mosaics and switch to using the 300mm or 200mm camera lens.  It depends if I'm done with film.

Film:
Yes, I'm planning on bringing film to the event.  I have E200 slide film for nebulosity and will take some rolls of Acros 100 for star fields.  I will be taking my old GM8 mount as well as the G11.  The GM8 will support the Pentax 67 plus a ST80 guidescope.  I'm going to guide using the Nexguide stand alone guider.  So long as the polar alignment is good and balance is good, it should all work.  I do still need to practice in the back yard a bit before I'm comfortable with it.  Will be a challenge because I'm going to do several firsts: film, nexguide, gemini 1.

Mak?
I'm planning to bring the Maksutov Cassegrain to do polar alignment on the GM8 since the weight of the system will be similar to the Pentax 67 and guide scope.  Once I've used the film I plan to bring, I might turn the Mak to bear on a high magnification target for the night.