I have been going after this challenge for nearly all of 2013, starting back at the beginning of the year.  There has been evidence of a slow drift in RA in the main images that has been difficult to remove.

My recent efforts were centered on firming up the camera mount by pre-stressing the flange springs.  This has worked pretty well, the camera now exhibits a flatness that is good.  It is a little artificial compared to the older, unstressed configuration, I'd like to make it less affected.


I know that polar alignment is a factor in the drift, as I can see the way that DEC movement is apparently uncorrected.  There's also some rotation in the images due to this polar mis-alignment.  It's not much, I'm more concerned about the linear movement.

I also tried using a barlow on the guidecam, giving a 1 arcsec/pixel resolution.  The mount and guiding simply became too figity.  Guide corrections never settled.

A recent step was to bypass the ASCOM driver for guide commands and use the ST4 jack on the SSAG via guider relays.  I'd read that for some people that have had issues with the Gemini 2 system that the guider relays are somewhat more reliable.  I tried this method earlier and was marginally pleased with the results.  Calibration moves were more reliable.

I also went back to using .5x guiding vs .2x guiding rates.  The .5x, while requiring shorter pulses still moves the mount solidly and thus there's much less jerky or queued movements.  The queue was due to slow movement requiring longer pulses.  With an exposure of 1 or even 2 seconds, the pulses would need to be longer than the intermediate time and thus error would build up.

As a last resort, I went back to the drawing board and up to the attic, where I had some old equipment stashed.  I got my old DSBS - a side by side plate for the Losmandy mount.  It's heavy and stiff.  It's also an old design with minimal mounting holes and only supports the wide dovetail plates.  The newer version supports the Vixen style as well as the wider style plates.  The newer design also has a variety of extra holes to support additional devices. 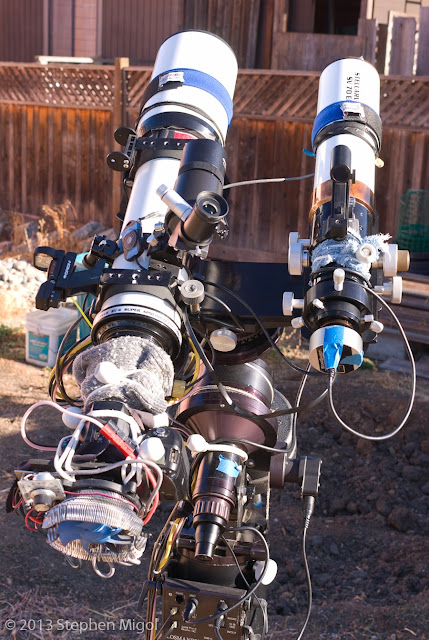 Putting the SV4 on one side was easy, mounting the SV70ED on the other was a bit of a challenge.  This latter scope comes with a vixen style dovetail foot, making it easy to support the center part.  The Feathertouch focuser has a very long drawtube that is used nearly fully extended.  This requires some support of the guidecam.  I was finally able to get a ring in place with some juggling.  I did have to remove the barlow lens because there just wasn't enough space to use it all on the dovetail.

Balancing the mount is much more challenging than before.  I'll want to mark the dovetail to indicate the proper positions.  I use the procedure noted by Starizona and William Astro.  This process is to first balance DEC then RA.   Having smooth movement along the dovetails helps a lot with this exercise.  Unfortunately, there's significant binding with the wide dovetail on the SV4 to make it a real pain to move.  I had to use a hammer to get unbound once.  Yay for pounding on precision equipment.

In the evening, I got everything lined up with finders and with respect to each other.  This is something that I can only do at night since it requires an object at an infinite distance to prevent parallax.

Built a model with about 10 stars on each side and was pleased to see reasonably good error values.  The Gemini computer thinks that the AZIMUTH and ALTITUDE are off by about 700 arcseconds.  That's close enough.  Refraction effect on the pole is about 1 arcminute.
FWIW, model 0 is west side, model 1 is east, although it's probably based on the order it's built.  If I add a few more stars to the model, then I can expect to start seeing counterweight flexure?  That's pretty wacky.


What I have seen is pleasing with what Maxim shows.


I've not had the chance to pull data that's been taken with the DSLR.  With looking at the guiding graph, I can see very stable movement.  So long as I'm not walking near the tripod, the guide corrections and graph are quite flat.  This bears repeating: I can see movement in the guide graph when I shift my body weight standing near the scope.  I think that positioning the computer further away from the tripod will be a standard effort. 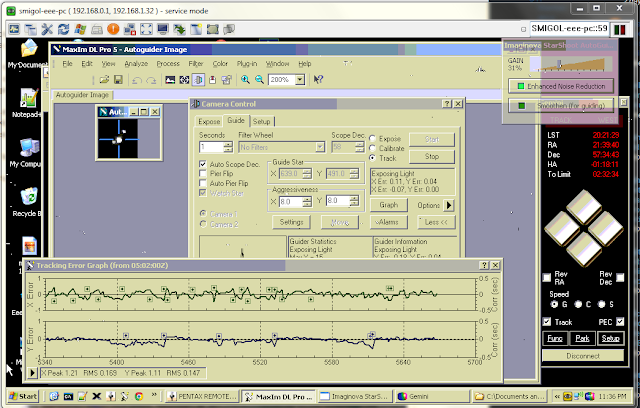 While I know that this side by side method is showing the most steady guiding I've ever seen with this mount, I'm wondering how much of it is due to proper balance.  I've biased to the east with the weight, I've also tried to balance in DEC as much as I can with the understanding that some bias is required for proper mesh.  The values in the screenshot above are listed in pixels, not arcseconds.  Note how few corrections are issued for DEC.  I believe at the time it was set for .10 as the threshold for minimum error.

As I have tested before, rotating the DSLR camera also rotates the flex, meaning that this is either focuser based or it's scope tube based.  Granted, there is some camera-based flexure and that shows up when I haven't secured the tripod socket.

What is interesting is that with the latest run of the scope from last night, the deflection is consistent over the movement of the scope.  There's little variation.  This is some indication that once the mount has flipped the flex is greater, making me consider that this might be balance.

Still, if it was balance, then the issue would show up in the guide scope image.

I noted a few bad frames due to DEC stiction.  In review of the log files, I can see where the mount jumped nearly 5 pixels and required a long time to recover.  In the coming session, I will drop the threshold to the .08 seconds specified by the CCDWare calculator.

Two things to try tonight:
Slew across the sky and check pointing samples.  If they disagree in different parts of the sky, then likely it's a sag issue.  If the difference only shows up after guiding, then I'm going to think it's not sag.

Regarding The TVC setting, I should reset it back to minimal.  I see where it causes a big jump.  I would consder leaving the calibration set where it is currently.  The G11 "step" is 1/27 of a second.  Thus, the default setting of 5 gives about .18 second of high speed DEC movement when direction is changed.


What did this exercise mean?

That the flex is independent of guiding.  It's all based on position/gravity.

I put a ring on the feathertouch focuser. Will repeat the same test to see if it shifts.
Astrophotography flexure Losmandy G11