October 08, 2013
I've run through a basic calibration using the data that I currently have in my library of darks.  Some stacks are very thin with only 3 subexposures available.  Others are more robust and are ready to use.

Temperatures for the camera were a comfortable mid-teens C in the early evening, quickly dropping as the night wore on.  The problem I face now is that there were temps in the 5C range that are out of the scope of what I have in the library with the current cooler.  I could reference earlier libraries and may do that when recalibrating.

Also, when I removed the IDAS filter, there was one day where flats made were overexposed by 2 stops.  These flats may be unusable and I may have to use flats from another night.  This error seems to show up as banding across the field.

Interestingly, when working with the IC 59 stack, I was playing with Kappa settings and found that the flare caused by Navi would erode based on lower Kappa values.  With Sigma Clipping, one flare would disappear and another would remain strong.  With Sigma Median, both flares would erode but not disappear. 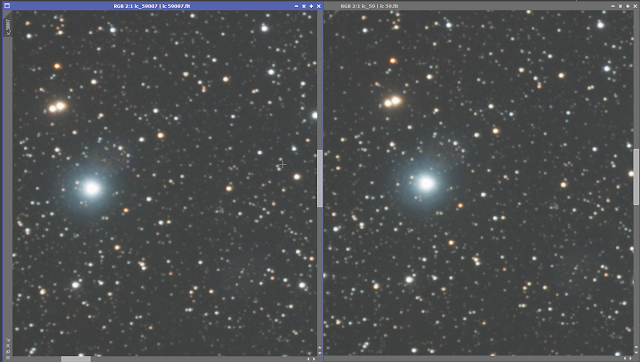 I think that the course of action here - barring getting more data - could be to clone data from the Clipping stack to the Median stack.  The area that has the flare needs more unflared data to balance it.

I've also seen new flare types showing up from stars that are even further from the field of view.  For example, when imaging the Monkey Head nebula, the star Propus causes lines of flare and an odd ring pattern.  The ring pattern will be fairly easy to crop out yet the lines reach nearly to the center of the frame.  I think I'll have to look at the flocking again and see what is causing the glinting effect. 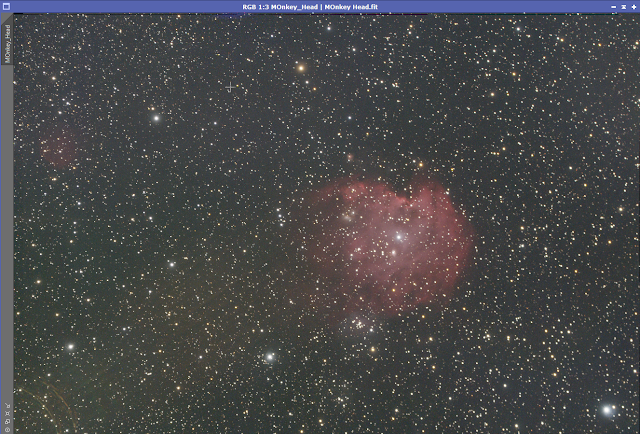 Also, I do see diffraction spikes around the brightest of stars.  These are likely because of edges of the flocking paper entering the light cone.  Will have to trim these offending bits for future work, but can't do much about them with the existing data set.

You can see these spikes appearing in the below example of the Horsehead.  Also in the view are a strange series of circular bands.  These are not visible in the sub exposures before or after calibration.  I've tried stacking with Average, Median, Sigma Clipping, and Sigma Median.  I think there's just too little data to use for the stack with only 3 subframes.  Interesting that I haven't seen the error before with other examples that only had 2 frames (the Pelican image from earlier this summer was an example of this kind of work). 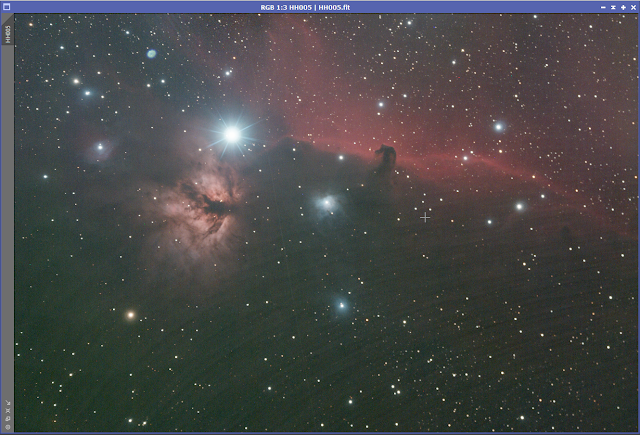 For what it's worth, the IDAS filter was in place for this shot.  I think the strong star flares are bouncing off the IDAS and onto other elements.  When taking other pictures without the filter, the flare disappears.
Astrophotography calibration Calstar 2013 Deep Sky Stacker flare IC 59 image reduction star