Continuing work on the Calstar images

I'm tweaking my calibration process with the images from Calstar.  As I've noticed in my final images, because the flexure is so much under control now, hot pixels are being a problem.  Thus, I have to do a better job of calibration to remove them from the source.


To this effort, I've worked on the bad pixel map from Maxim for this K10D.  It's a very mature map at this point.  When I run it against a source image, there are few hot pixels left.  Most of the ones that still glow dimly are only in the 600-700 ADU range on the darks.  They still count as "warm" pixels, but there could be data retrieved from their locations.

At the second step of processing, I'm now turning off the cosmetic tab of DSS.  This step tends to introduce some softness to the star images.  It's also not catching the hot pixels that make it through the Maxim calibrations. 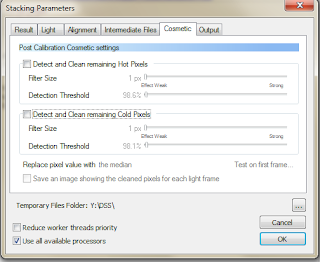 In the future, I'll need to incorporate dithering to the images.  Maybe I can look into some scripting to make it work?  I'll want to research how scripting works in Maxim.  Just a nudge of 10 seconds would do the trick.  It could be in RA.

As a part of the work I'm doing, I see that there were alignment issues with the camera during Calstar.  The right hand side of the images is skewed.  This could be because of the B+W 486 filter.  Or it could be from the sensor being shifted.

At any rate, I am picking up a copy of the new Hutech filter HEUIB-II.  It's a UV/IR filter that has a cutout at the red range and a gap at the Ha.  The filter is built to work with full spectrum cameras.  Tests show that it would be better than the IDAS LPS for controlling the reddish background glow that I see in my shots.  To best use this filter, I'll be removing the 52mm B+W 486 from the feathertouch focuser.  It might also remove the flare that I'm seeing on my images.

Not sure how the IDAS LPS and this HEUIB-II will work when stacked.  There's enough light pollution in the at home skies that I can't justify not using the former filter.    I did get a 52mm and a 48mm version of the new filter.  The 52mm could go on the Feathertouch focuser or on a camera lens.

Slow progress otherwise.  The next set of data I want to work on is the Triple Cave.  Here's the quick and dirty STF screenshot from PI directly after stacking: 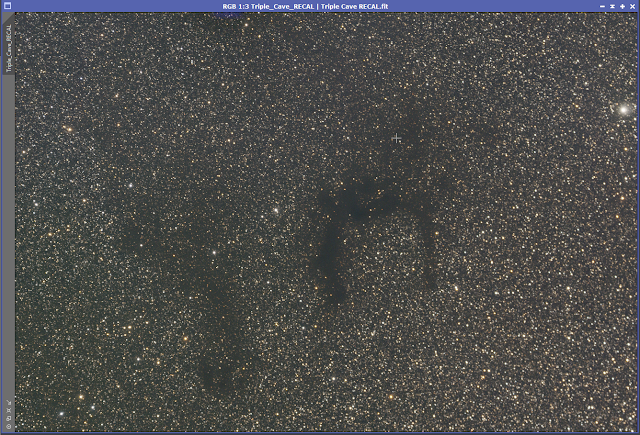