How well did the flocking work?


Last week during the clear nights, I was able to get some images of the night sky from the back yard.  I was taking some pictures near M53.  There is a somewhat bright star nearby, Diadem, aka HIP 64241 or 42-Alpha Comae Berenices.  This star is a magnitude 4 star, somewhat less bright than other stars that were giving me issues.

Here is an image of the stack with a simple stretch in PixInsight.  Note the diffuse, linear nature of the flare. 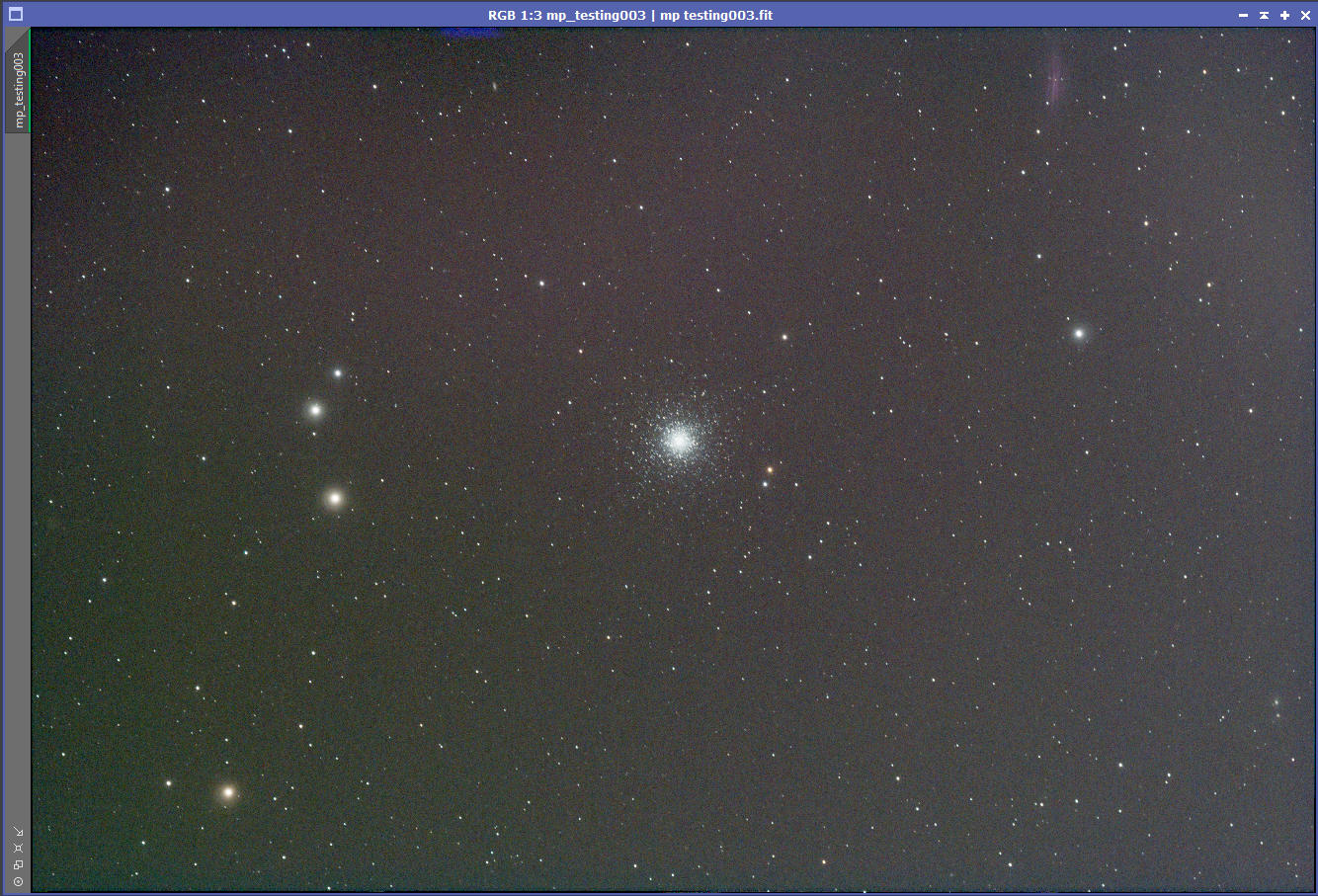 Here's a view of how it resides outside of the field of view of the frame.  Note that image has been linked in TheSkyX and the white line shows the frame of the platesolve.  Also note the distance tool showing a relative distance from the star to the brightest portion of the flare.  The value is about 7' 57''. 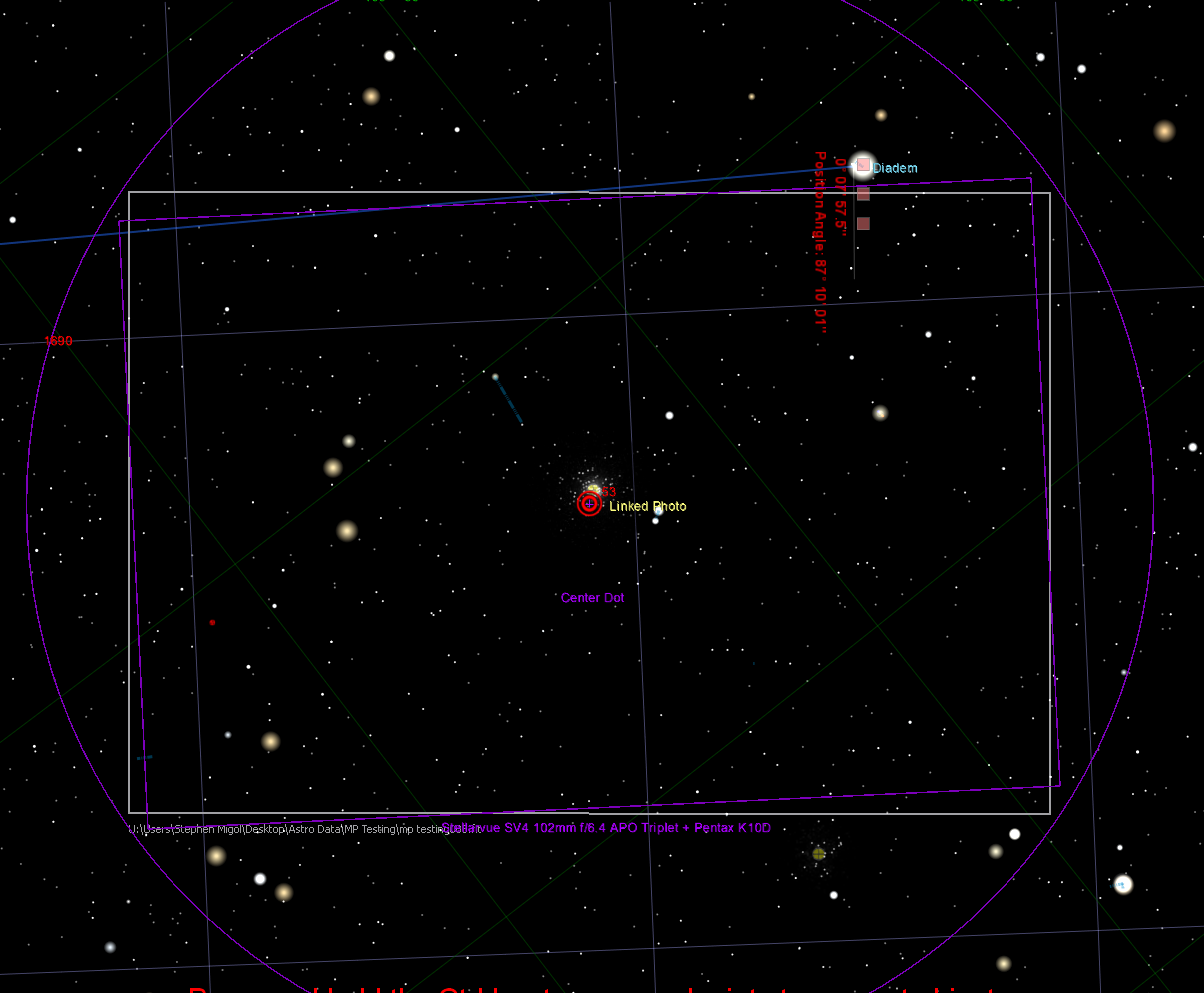 Lastly, I have a screen capture of the CCDWare website tool that shows a calculation for dust donuts.  I've added the calculation of what I see as the brightest part of the flare.  Numbers for the Pentax K10D are 6um pixel size, the SV4 scope is f6.4, and the distance of 8 arc minutes is about 250 pixels at the resolution of 1.9 arc seconds/pixel of this setup. 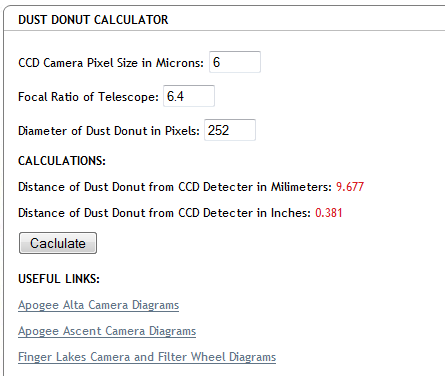 Interesting to note that the CCDWare tool suggests that the flare may be originating at 9.6 mm in front of the sensor - or at 19mm if I recalculate assuming that the 8 arc minutes is actually the radius and not the diameter.  As the Pentax camera has a flange distance of 46 mm, this puts the reflection within the mirror box of the DSLR.  I have looked at the camera in the past and wondered if glinting could occur off some of the edges, specifically around the light meter.  The box sides are baffled with ridges but there are some metal panels that extend into the light path a bit.  I wonder if the edges of these are fully blackened.  I will try to cut some pieces of flocking paper and place them along the sides of the box.

I would like to check the trace to ensure that the calculations above are correct.  I'll have to remember my trigonomy.

It's important to note that for this stack, I did NOT use the extended hood.  Rather, any changes in flare control came from flocking inside the flattener. I did use a longer hood on other image sequences and felt that they were causing issues with star shapes and diffraction spikes so I abandoned them in favor of running the dew heater more aggressively.

EDIT: The more I think about this flare, the less I believe that it's coming from reflection and more likely from either dirt or condensation on the optics.  Looking at TheSkyX, the star is just off of the sensor.  It's possible that the relctions are coming from components on the board nearby as well.  It's just too close to block even with a longer hood.
Astrophotography flare