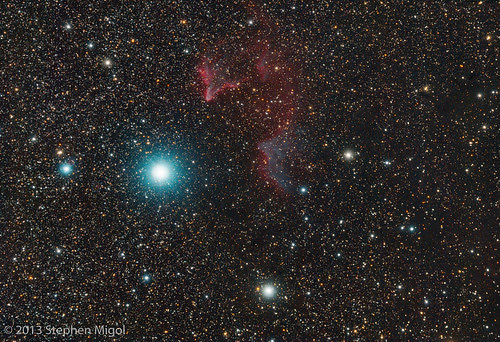 Ghost of Cassiopeia (IC 59 and IC 63) at Calstar 2013, a photo by S Migol on Flickr.
Via Flickr:
This area is a complex of dust near the bright star Navi in Cassiopeia. The nebula glows with a combination of emission and reflection, giving a reddish and blueish white color. The whole complex of IC 59 and IC 63 also are in the Sharpless Catalog as Sh2-185.

Taken over two days while at Calstar 2013 in October. Most data was collected on the first night after I'd done polar alignment and while I was struggling with polar alignment and guiding of the GM8 for film work. The rest of the data was gathered piece-meal as I had shut down the GM8 and went piggyback for the film camera.

Standard setup for my digital work:
Stellarvue SV4 telescope using SSF6 flattener
Modified and Cooled Pentax K10D camera
No light pollution filter, just used the B+W 486 UV/IR filter. For a time I was using this filter to control NIR and UV on the full spectrum camera to control what I thought was out of focus light causing problems.

10 subexposures at 1200 seconds each giving 3 hours and 20 minutes of integration time.

I had some challenges with flare on this data. Because the bright star Navi (Gamma Cassiopeiae) is near the center of the frame, it blazes at 2.5 magnitude, causing reflections to show up around the scene, specifically near HR266. The limited amount of data I had to use made it difficult to control the flare. Only by stacking with rigorous rejection routines (DSS Kappa Sigma K=1 x 49) was it possible to control the flare. Here are some notes from that effort. blog.migol.com/2013/10/calstar-2013-calibration-and-stack...

I have not taken a similar image recently that features such a bright star. I'm curious what the recent centering and alignment and flocking work I've been doing will change the behavior of the system.

Here's the plate solve from PI: