The end of 2014 featured my processing the images from Calstar and with no more trips out to the field.  I did set up the scope a few more times in the back yard in October, with no other sessions due to weather and time. 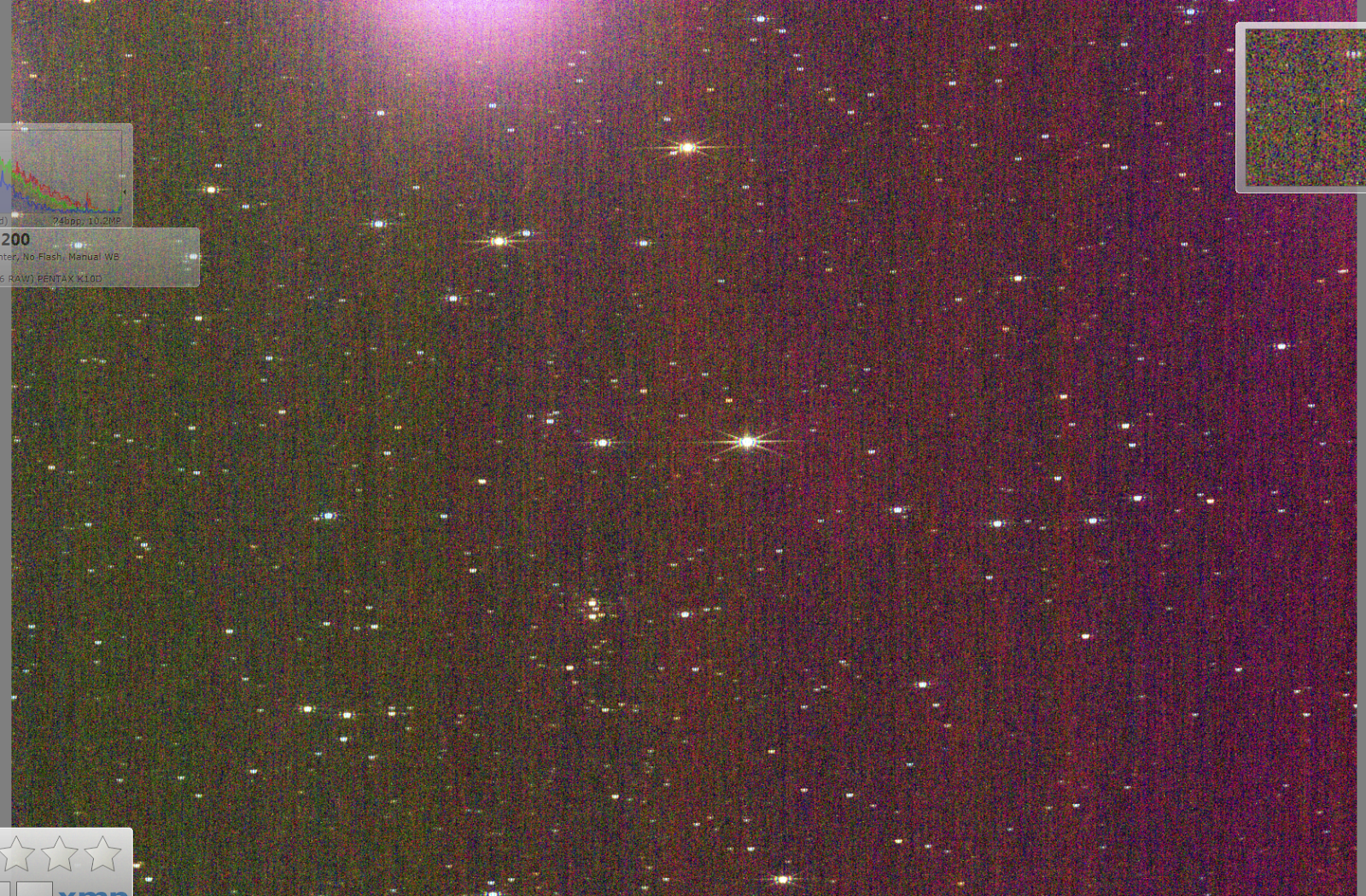 One of the interesting thought experiments I followed during that time was concerned with sensor tilt.  It seemed that no matter what I did about shimming the adapter/flange interface, there was always a little bit of trailing stars in the corner.  Using the bahtinov mask and taking a picture of an open cluster quickly showed how the sensor was tilted to the image plane.  Open clusters M35, M44 (the Beehive), and M45 (the Pleiades) are always good targets for this kind of testing.

In the example seen here, the edges of the image show what the bahtinov mask spikes look like.  It's plainly visible that there's some tilt happening.

Finally, I used the depth gauge to measure each part.  I checked the distance from the glass of the flattener to the end of the T threads.  No difference at each edge.  The DSLR sensor showed a tilt of .06 mm.  I ruled out measurement error by checking multiple times.  Using the calculator for CFZ at Wilmsloastro.com, the SV4 has a CFZ of 105 microns.  This sensor tilt would most likely be lost in the allowable error.  Still, I shimmed underneath the Kmount flange by using thin layers of tape to reduce the measurable tilt to less than .02 mm.

Finally, I checked the T ring adapter.  I was surprised that it had a tilt of .11 mm.  This, coupled with the sensor tilt would be more than enough to show the skew in the bahtinov mask image.  The offending adapter was one of the two-part devices where grub screws hold the pieces together.  I checked another adapter that I've used and found it to have no tilt.  Thus, this is now the adapter that I plan to use!

I've not had the chance to test since these full changes.  Instead, I've shot the comet using a 300mm camera lens.  The tilt fix for the flange mount seems to be holding up and the star images are in focus across the whole field, given the limitations of an 80s vintage lens design.  There is slight curvature (surprising for a telephoto) but not too bad when stopped to F5.6.

In the effort to use the camera lens, I firmed up the configuration for using the DSLR to shoot widefield.  I needed to lengthen the hoses for the liquid cooling and add a dovetail bar to allow the camera to pivot.  I believe that this will be the final way I leave this DSLR.  It's firm yet movable.


To continue the testing on this method, I shot some of the Rosette from the backyard.  The data looked good, better than the struggles of trying to get comet Lovejoy.  More on this image later.
Astrophotography bahtinov mask DSLR focus tilt