For 2019, I brought a good friend of mine Scott Farrar to the star party. 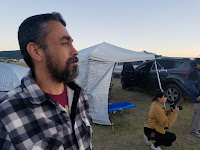 We’d trekked together for the 2012 annular eclipse and the 2017 eclipse in Madras, OR.
He’s been up to Montebello a few times for the small public nights there as well.
Making the jump to the big star party seemed like a good idea and I was happy to suggest it for him.


Taking two people plus gear to the party meant using a different vehicle and packing plan.
I usually take the prius with the rooftop pod to allow bringing 3 tripods with scopes, although there is
no room for a second person.  In this case, we opted to use Scott’s hybrid Rav4. 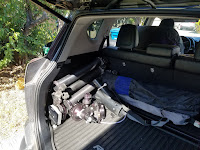 The hybrid option still met the power needs of the scopes and my CPAP.
The Rav4 didn’t have the option for the roof pod unfortunately.
Packing his car required nearly 2 hours on Saturday morning!

This year’s star party in Adin, CA, ran from June 29 through July 3.
This was the first time that I saw the event start on a Saturday. I believe that the idea was to let the
town have their July 4 holiday without the throng of star gazers.

Saturday was a mob scene when we arrived - got in the gate at 5:00.  The field was packed - just like
a normal Saturday experience. Luckily Anthony and Isabelle had saved a spot for us on the perimeter.

After setup, we met our neighbors: Keith from Santa Rosa, Anthony and Isabelle, Willis from
San Jose, Emma from TAC, and Phil Manela were all close by.  Over the weekend we all went to the
meals together and shared moments at the eyepiece.

The first night was clear until 2 am.  There was a lot of upper level turbulence and haze that gave the
stars haloes.  Luckily, there was minimal actual pictures taken. Instead, I was plagued by
misbehaving electronics.  Isabelle and I loaded up the G11 with a pentax 67 with 165 mm lens with a
Canon 35mm film camera using 70-200 mm zoom plus a digital camera on the SV 70ED with
reducer/flattener.  We tried loading Ektachrome 100 new formula in the Canon, but that roll had some
deformed sprockets that foiled the camera’s auto-load mechanism. Put Fuji 400H into both the 67
and Canon.

As noted, when the stars were clouded out at 2 am, It was time to call it a night.

Sunday, I was able to find a copy of the Year round Messier marathon book, replacing the copy I’d
given to Rebecca.  I also got rid of my two starshoot autoguiders. There was only one other thing that
jumped out at me during the swap meet, but didn’t buy it.  I would have liked to sell more books and
parts, but was already carrying too much stuff.

Conversations with other observers showed that some of the connection issues experienced the
previous night were likely caused by intermittent contact and that some exercise of the USB joins
were the best course.  I’d already removed the USB 2 repeater cables in favor of dumb cables.
Once I ran all the connectors through their paces, all data communications remained problem-free. 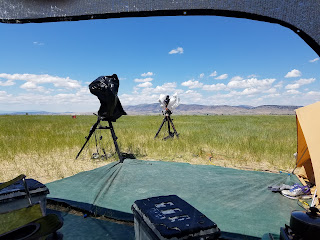 Additionally, I swapped out the visual scope (Celestron Comet Catcher) for the dual 400mm lenses.
Scott was becoming adept at borrowing views of eye candy through other scopes and was having a
good time.  I did not need to entertain him with a dedicated visual setup. The change allowed two
more 67 film cameras to be put into service.

I loaded one of the 67 cameras with the Panchro 400 film on the 400mm takumar lens. I replaced the
yellow filter with a borrowed Hoya UV filter.  I wanted to let the film see the Ha light since there was
supposed to be some sensitivity. This configuration was kept through the rest of the event, including a
roll of Acros.

The other 67 was also loaded with Fuji slide film in the hopes of getting something.  Past reports of
this film showed lackluster Ha response. Later, this same 67 was loaded with E200 Ektachrome.

At the beginning of Sunday night, I taught Isabelle the process of swtiching targets using TheSkyX:
Stopping the film exposure, stopping the autoguiding, identifying the next target, slew while watching
for collisions, restarting autoguiding, and finally starting the exposures.  For a while at night we were
both in sync, keeping the mounts going. When there was an issue, I jumped into action. Because
Isabelle was able to get the other setup going, we didn’t lose time.

Sunday night was clear through the majority of the night.  There were a few clouds early, bit those
moved out of the field of view within an hour after full twilight.  Isabel and I got the night started early
with shots of the Cygnus areas, then an attempted sequence of Sagittarius.  Unfortunately, it was
plainly obvious that the GM8 wasn’t able to slew to that low of an apparent altitude due to a mount
collision.

Sunday also had a great visual treat - Willis put his PVS light amplification device on Rob’s 20 inch
F3.3 dob.  He used a nebula filter that passed Ha and OIII. Using this setup, we viewed the nebula
eye candy while waiting for the clouds to clear in the eastern sky.  We started with the Western Veil,
looking at the Witches’ Broom. Pretty amazing to see the level of detail and tendrils on the gas by
using the whole eyepiece train.  Soon there was a line of folks ready to take in the view. We looked
at the Sadr region (and I couldn’t find the Crescent, mostly because I forgot how to star-hop). Then
slewed south towards the galactic core.  The little coalsack was the best view I’d seen since looking
through Bill Faatz’s bino box. The light intensifier did an OK job of handling the dark areas - mostly
because it increased the contrast with light areas.  This made it easier to find the dark nebula
although there was noise in the gaps. Looking at M8 was a crazy experience. The contrast was
intensified and the dimmer regions were easily seen. When I was waiting in line for my views of the
Eagle and Swan, I remembered my best exposures of these regions to better prepare myself for the
difference of view.  The Swan looked like a well-exposed Tech Pan shot. The amplified light was
compressed, showing the very faint tendrils that extended well beyond the central nebula. The
compression enhanced the contrast of the scene, strongly showing the effect of the obscuring dust
clouds. The Eagle was a prime example of this trick and it looked great. After an hour of viewing the
major eye candy, our brains were full of visions of nebula, truly a grand spectacle.

Late Sunday night, early Monday morning featured a bolide that streaked across the sky, alarming
the throng of those still awake.  Alas, I was laying in my tent with my eyes closed as I waited for a
40 minute exposure to finish. I saw the flash through my closed eyelids and through the fabric tent,
so it must have been really bright!  People were chattering about it for the next day. 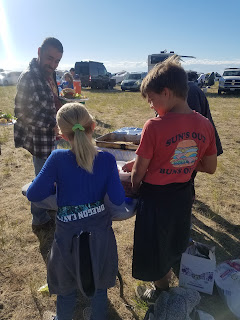 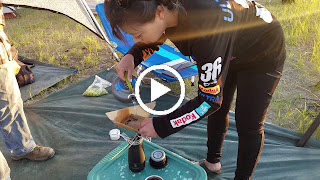 On Monday, Scott, Phil, and myself went to town to get ice, water, and some food at the Oney grill.
Shared good conversation over birds, squirrels, and politics. Had my first brain freeze in a long while ….
I forgot how much those hurt.
Monday’s meal at dinner was the burgers provided by the Albaughs.  As always, really great beef with
salad and rice. Was nice to see the matriarch still greeting all her guests as she’s getting older. 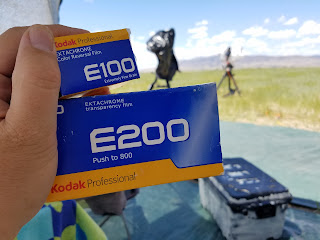 The film was changed in the 67 cameras: E200 at 400 and 165mm and Acros at 400mm in the takumar.
Exposures were changed to 40 minutes. The 400mm lenses were set to F5.6 and the 165 was still at
F4.  All these films are to be pushed one stop. As mentioned earlier, the takumar was used with a clear
filter rather than the previously used yellow filter.  This is expected to give some bloaty stars but is
expected to recover a stop of light.

Monday’s evening was again delayed a bit as clouds needed to clear during twilight.  Once they’d
passed and the darkness was total at 10:30 we got to work banging away at exposures.

Good success through the night for tracking and keeping the schedule tight.

Tuesday was the final full day of GSSP.  Woke early as I’d done on the other days, ready to shed the
cold and get going.  Second breakfast was the pancakes made by the volunteers. They also dedicated
the new grill in Rich Girard’s memory.

The rest of the day was lazy, we watched the combines mowing the hay on the fields north of the site,
wondering if there was going to be a repeat of the baling work that ran until late at night a few years ago.
Luckily, this didn’t materialize. Broke camp at the end of the day, pulling down the shade structure and
folding up tarps. Since the weather was still cold, the tents were left standing.

That night’s weather was the coldest of the week - I measured temps as low as 32 F at 3 am.  The
ground was measured at 42F, metal parts of the mount were 38 F, and the surface of the folding table
was 32F.  Brr!

Finished out the rolls and slept at 3:40 am, about 20 minutes before beginning of twilight.
Packing out was slow and tedious.  Too many distractions, too many steps to de-cable, remove tents,
and pack the car.  Luckily it was a cool morning and Scott was ready to help.

Said our goodbyes to the neighbors, promises to meet at Calstar, and wishes for safe travel.


When I got home, Mika had a pile of 10 yards of mulch for me to put around the garden!  I move from
one hobby to another! 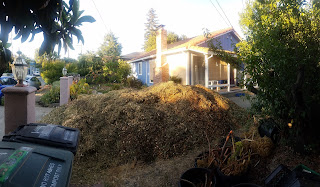 I've been peeling onions in the backyard these past nights.  Based on some questions from Marek and Carl, they were experiencing strange DEC behavior when guiding near Sadr during August.  I felt that much of the problem was due to tracking through the Zenith where scope balance is most ineffective at keeping DEC meshed.

Since I'd moved onto the problem after handling some of the earlier questions about Gemini systems and getting the camera cooling nailed down, my current target is the same region as the problem area.  I quickly saw similar DEC jumping as bad as what Marek was experiencing.

Interesting things that I've learned over the years for calibrating astro-images with my Pentax K10D camera.
The Pentax K10D camera is an older design, released back in 2006 when Pentax was an independent company.  Since then, it has passed through the hands of Hoya and now is a part of Hitachi.  I'm not sure of what will happen with the Pentax name, but for now, it remains an independent brand.

As some context for why I'm using Pentax for my astrophotos, the short answer is "use what you have."  The long answer is that I already had an investment in old glass and wanted to continue to use it.

More chasing flexure
I have been going after this challenge for nearly all of 2013, starting back at the beginning of the year.  There has been evidence of a slow drift in RA in the main images that has been difficult to remove.

My recent efforts were centered on firming up the camera mount by pre-stressing the flange springs.  This has worked pretty well, the camera now exhibits a flatness that is good.  It is a little artificial compared to the older, unstressed configuration, I'd like to make it less affected.