August 09, 2019
For this recent star party, I shot one roll of Acros on the 400 mm Takumar lens.  Exposure was 40 minutes with the lens stopped down to F5.6 to control purple fringing.  The in-line filter used was the Hoya UV as borrowed from Anthony and Isabell. 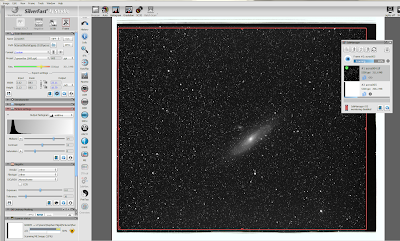 Used the GM8 mount with the mini-guider as the tracking setup with a Lodestar 2X as the camera.  I also added a method of providing “digital QA” on the exposures by putting a QHY10 on the bar with a camera lens.  The intent was to be able to detect tracking problems before they became issues.

This QA intent didn’t come to a good result.  There were errors with the guiding that were evident on the first night and didn’t get resolved over the duration of the time.

First, I noticed a regular sweeping pattern in RA.  This looked remarkably like periodic error!  This was something I was not expecting to see at the guiding focal length of 160mm.  I chalked it up as something to cover at a later session - there’s no way that a point to point error of 8 to 16 arcseconds was going to show up on the film.

Second, I noticed that the stars sometimes wouldn’t center on the guiding crosshairs.  Happened more often on the second and third nights.  I played with real-time settings, trying to give the motors enough time and correction settings to be able to properly recenter the star.  Alas, these didn’t work well enough to remove the problem.  Again, I figured, since the start didn’t move from the offset position, I figured that it was just a targeting issue.

Third, I noticed that the RA motor was a little warm during some of these sessions.  This showed me that either the east bias was too strong or that the motor couldn’t keep up with the required torque to shove the imaging load around.

Unfortunately, my assumptions about these errors not being visible were wrong.  The film recorded short streaks of stars in RA.  Apparently the error in RA is readily visible at these focal lengths.  See the close view of M31.  The streaks are plainly seen. 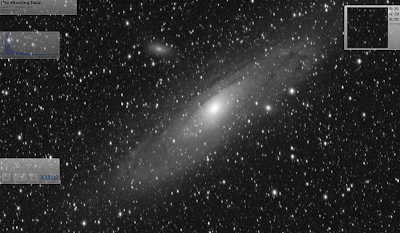