August 23, 2019
During testing of the GM8 and PEC programming, I made a mistake and let the mount track unattended.  Unfortunately, this meant that the USB cable connecting the Sbig STi camera was snagged and pulled very tight.  So tight that it frayed the insulation while being dragged across a corner.  I guess the torque on these new motors is much higher than I originally expected.

Unfortunately, this tension pulled the USB socket on the camera out of place, breaking the surface mount solder points.  The socket was wobbly, showing that it was likely just being held by the traces.  Luckily, data still worked, so connectivity was still intact.

After checking with SBig and confirming if this was serviceable, I pulled the camera apart and checked to see if I could use some adhesive to secure the connector.  There was limited space under the connector to use the adhesive.  Instead, I noted that the pads could have their solder re-flowed and the connection restored. 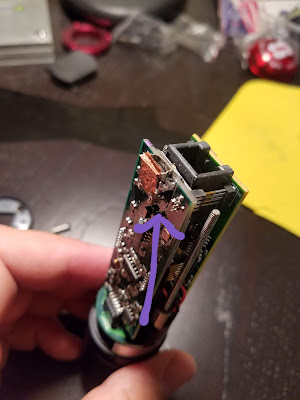 This is not the only time that a cable has snagged recently.

On the last trip to MBOSP, I accidentally let the battery replacement cable for the 67 snag.  Unfortunately, the cable broke the solder points within the dummy battery pack.  I'll need to fix this before Calstar so that two 67 cameras can be used at the same time again.
Autoguiding Repair USB