On June 30, I brought the kit up to MBOSP for a good night of stars above the marine layer.

The clouds were strong below our altitude making for good darkness and pleasant observing conditions.

Set up the Horseman L45 camera ad the GM8 in the twilight.  Lots of cable craziness since I'd not taken the time to try any fiddling in the back yard prior.  To compensate for lack of preparation, I brought too much gear like I always do. 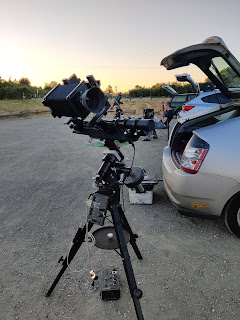 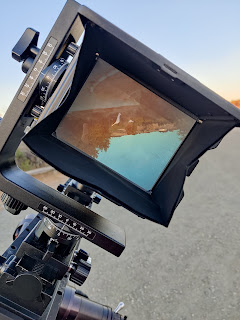 Needed to update a bit of software on the system that I was planning to use so I brought two machines to copy files.  The files to update were the StarlightXpress driver package and the latest stable build of PHD2.

After a long time of frustrations of finding and losing and then finding again the cables needed for the setup, I was ready to calibrate and run the guiding assistant that's built into PHD2.  This assistant is a script that runs a variety of commands on the mount while watching the star movements.  This helps to tune the settings needed for optimum control.  It did a backlash test and found a 25 second(!) backlash in DEC.

That seems a bit high, but I'd already loosened the DEC axis a bit to manage binding, so I'd not a problem.

I could see how TVC might be useful here.

While the assistant was running (I let it do the analysis for an hour) I was able load film in the holders.  Fun thing: there was already film in one holder!  Meant that I struggled to try to load film on top of film.  Good to know that the holder is tight enough to prevent this mistake.  The two pieces of film I'd mangled while trying to load them eventually got lost in the changing bag and I found them when developing.  Now I have 4 pieces of scrap film to practice.

Achieving focus was a bit of a challenge as I needed to get a bright star on the ground glass.  At 300mm without a red dot finder, trying to center a good star was a bit challenging.  Once I'd found infinity focus, the stars were easy to see and the 10X loupe showed everything I needed.  At the end of the night, I was pleased to see that very small and dim stars were easy to spot on thr ground glass.  Rocking focus back and forth allowed me to see these small stars pop in and out of visibility as their light was concentrated and diffused.

First light exposure was the Rho Ophiuchus complex, centered on Antares.  30 minutes at f5.6 for 300 seconds.  This is wide open on the Schnieder APO-Symmar 300mm F5.6. I was hoping that the lens would have good corners. From what I could see on the ground glass with the loupe, the corners showed no sign of coma.

This exposure was finally started at about 11 pm, well after dark, mostly due to being methodical about the guiding and alignment.  It was cut short at 30 minutes because some observers were heading out and I didn't want to ruin the frame.

The second exposure was 45 minutes centered on an area slightly west of the Pipe Nebula.  It was not intended to catch M8 and M20.  Again, this was mostly a test of flatness across the field and these dense regions are good for evaluation.  The exposure went off with no problems.

PHD2 guiding graph showed almost all the tracking was within a 4 arc second peak to peak range with some DEC excursions to 8 arc seconds.  The relative insensitivity of the film to light makes deviations like these less of an issue than with digital.

I packed up at 1 am and was down off the mountain and through the marine layer and in bed by 2:30.

On Friday night, I developed the film using the Arista E-6 kit and a small Stearman Press tank. 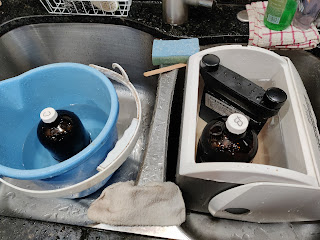 The tank is super easy to use.  I actually like this more than roll film.  No curled edges, no mess.  I can develop the whole kit in a smaller igloo container using hot tap water since the required temp is 105F. 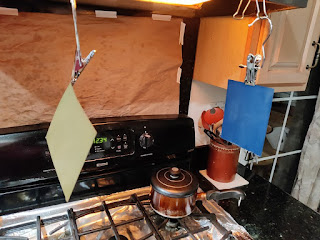 Slide film always looks like this coming out of the bath.  Takes about an hour to dry out and become clear.