Golden State Star Party 2022 is over!

Quick summary of the event! 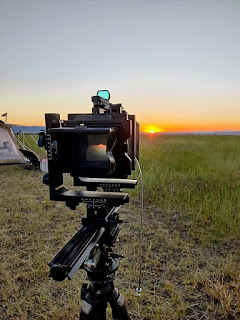 Weather was great - temperatures were only in the upper 80s during the daytime.  Strong breeze in the afternoon as usual.  Cool nights, but not as cold as previous times, temperatures dropped to about 50.

Wednesday night was clear and crisp - very little upper atmosphere haze and the milky way "crunchiness" extended down to 40 degrees altitude.  Looking towards the south is always tempting at this dark site.  The dark cloud distinction extended down to the south as well on this evening.  I resisted shooting this location and only imaged as far down as 35 degrees.

Much of the early night was lost to polar alignment - suprisingly difficult even with the polemaster!  The G11 worked well and then the GM8 was a little more finicky since the adjustment screws are coarse.  I chased PHD calibration issues for a while on the GM8 and finally settled on accepting the error message.  I also had unexpected behaviour from the mount as it wanted to slew wildly during some park commands.  After swapping out USB cables, I opted to remove the USB 3.0 hub that was in the power supply for the old style 2.0 hub I had in reserve.  The first exposure of the night turned out to be a dud as I forgot to remove the dark slide.  Oops!  Only 1 image is likely to be any good that evening as I accidentally let the second image go well into dawn.

While the 4x5 was imaging, I was able to put my attention to the SV4.  I'd not done anything with this setup since 2018's LDN image.  This showed as the QSI camera refused to start properly.  Swapping out the cables and the 3.0 hub didn't improve the situation.  I brought the camera into my tent so that I could easily bench test it without crouching at the telescope.  No go, but I did get some interesting information that I used to post to the QSI Groups.io newsgroup.  Eventually I sent a note to Atik support.

Thursday night was not as crisp as the previous evening.  Looking towards the south showed softness that extended well above 30 degrees and reminded me that going north to GSSP benefits shooting towards the north!

Got two great exposures on the E100, 300mm at f5.6 (wide open - which I may regret).  Both are 2 hours long.
Thursday's visit to the swap meet was serendipitous.  Earlier in the day, I'd mentioned that my only "dream lens" for the 4x5 would have been the 600mm aero ektar.  Strangely enough, there was a near equivalent on the table at the swap meet.  For $75, I picked up the 508mm f5.6.  There is some lens separation in the rear element.  Not sure how this will effect the image. The seller is sending the yellow filter to go with the lens.  This will be a good addition to the 500mm f7 I already have.  Next step: ask Tony to cut out a large hole in one of the lens boards to fit this monster.

Later in the day I went to the other vendor at the star party and found a used, push-to Losmdandy G11 mount.  It needs some care to bring it back to proper function as the RA and DEC do not lock properly.  I've done this kind of work before, so I'm excited to work on it.  Best part is the pricing was hard to beat.  Once I'd started the process of talking with the vendor, it was a slippery slope as I felt that I could maybe get the gear together to put one of Anthony's canon dslr on the SV4 since it was idle.  Picked up a 60mm guide scope which actually is a pretty decent addition since it attaches to the Synta guider dovetail.  In the end, I was unable to get it to work since there was no power source for the DSLR.


During the following daytime, Atik support got back to me asking for videos of the camera startup as the filter wheel and shutter wheel motors sometimes are dead when idle for long periods of time.  Videos were shot and shared.

Got a shower (finally) and got a few afternoon landscape pictures for a change.
Snapped some group photos of the nearby camp as it turned out to be the last night for all of us together.  The sunset was dramatic and I got some frames on Ektar.

Friday night had the same reduction of overhead sky.  At 10 pm the circle of "crunchy" milky way was centered about 50 degrees altitude.  Still large enough to image Aquila and northwards.

I reloaded all the depleted film holders while an exposure was running.  Surprisingly, the whole operation of sorting film into boxes and all that burned up an hour of time!

After fiddling with film in the dark, I joined the rest of the crew over at the secondary dob camp for some night vision action.  Phil Manela and a few others were using Willis' white phosphor camera on decent sized dobs.  The ability to see faint nebulosity in real time is always great.  This time the nifty feature was seeing the dark nebula between the North America nebula and the Pelican nebula.  Being able to see the tendrils of darkness and texture in the nearby Cygnus Wall was superb.  Somebody mentioned that it looked "ominous" - I remarked that the 3-D effect of the foreground object of the molecular cloud was plainly obvious to my eye.

Standard two shots on E100 that night, ending at 3:15 am.  Nice to get a good sleep afterwards.

The final night gave poor expectations as Saturday afternoon had clouds moving into the area.  Looking up, I could see what appeared to be high rain that was falling but not reaching the ground due to the arid conditions.  Many people started leaving the site.  I broke camp and packed the car, leaving just one tripod set up and preparing to sleep in the open on my cot.  Looking towards the west, Shasta was covered by cumulonimbus clouds and it was expected that rain and lightning would reach the site eventually.  Patience was rewarded as shortly after sunset the skies cleared.  Not much imaging done as we all waited for the moon to set.  I snapped a couple of "earthshine" images on the FPP Frankenstein film - one at 15 seconds and another at 60 seconds.  The reduction of the crispness of the seeing continued the pattern as the overhead milky way looked soft.  I settled into a taking a shot of the dark nebula in Aquila on Acros after 11 pm.  Slept for 2 hours and woke to the flashes of light from the electric storm happening to the west.

Taking this as a not-so-subtle hint to get packing, the last of the gear started coming apart at 1:30.  Packed the car, leaving room for me to sleep behind the wheel.  I got everything put away and pulled up at about 3 am and quickly fell asleep.  Woke at a little after 5 am.  No clouds in the sky, not a bit of rain had reached the site overnight.  Had I been courageous, I could have captured a few more frames.  Nevertheless, being packed and ready to leave at 7 am has its advantages and I was on the road early and home by 1 pm.

Overall summary:
Great experience, would do it again! 5 stars!
Sucks not having the shower truck on site, but I learned how to embrace the funk and how to clean myself up with less than a liter of water.