First lights with the 900mm f8

I posted the first light pictures last night on the flickr and then put them on CN.

I'm pleased enough with how they look.

I think that I'll eventually try the acros with this setup.  Roll film and the sheets.

It was clear and cold that night.  I'm glad that I finished the testing that I wanted to do.

The shots from Saturday are full of details.  Lots to learn.

The scope balance was off so only the images shot to the west are any good.  The east side shows heavy trailing.

The focus test with the bahtinov mask left a lot to be desired - the stars were not bright enough to show diffraction spikes.  The only light that showed up was a flashing beacon on a passing aircraft.  It appeared to be right on the money. 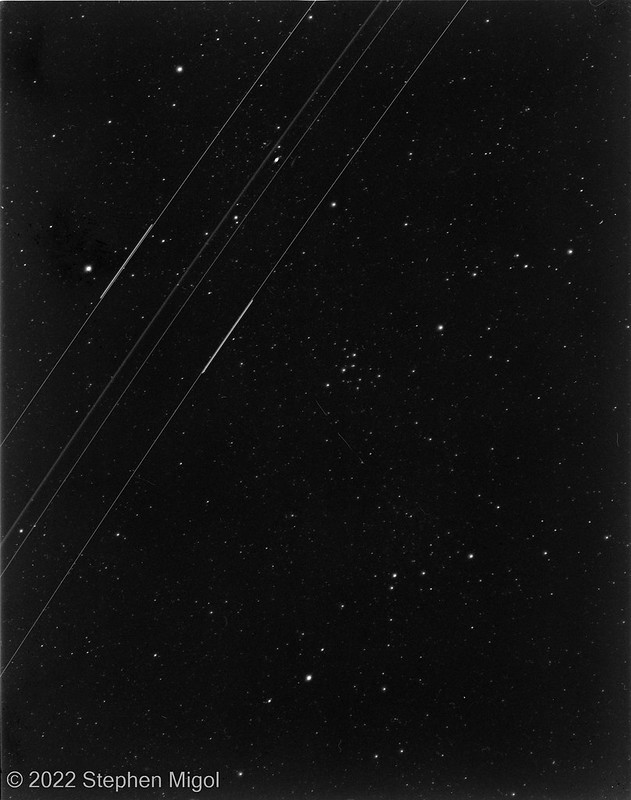 This lets me know that focusing with the ground glass at 10x is pretty good.  I like the e-tone loupe for daytime work as it has a nice eyecup.  It’s a little too narrow of a view for the stars.  I prefer the Adox 10x for stars because there’s a larger field of view which catches the little stars when they pop into focus.

Scanned the film and did very little processing.  Scanned the full 4x5 at 2400 dpi and the central crop at 6400 dpi.

There appears to be a little softness in the upper left corner on the full sheet view.  That softness may be from film curl.  It's unlikely to be from the lens field.  There's no corresponding distortion on the other side, so I can rule out field rotation. 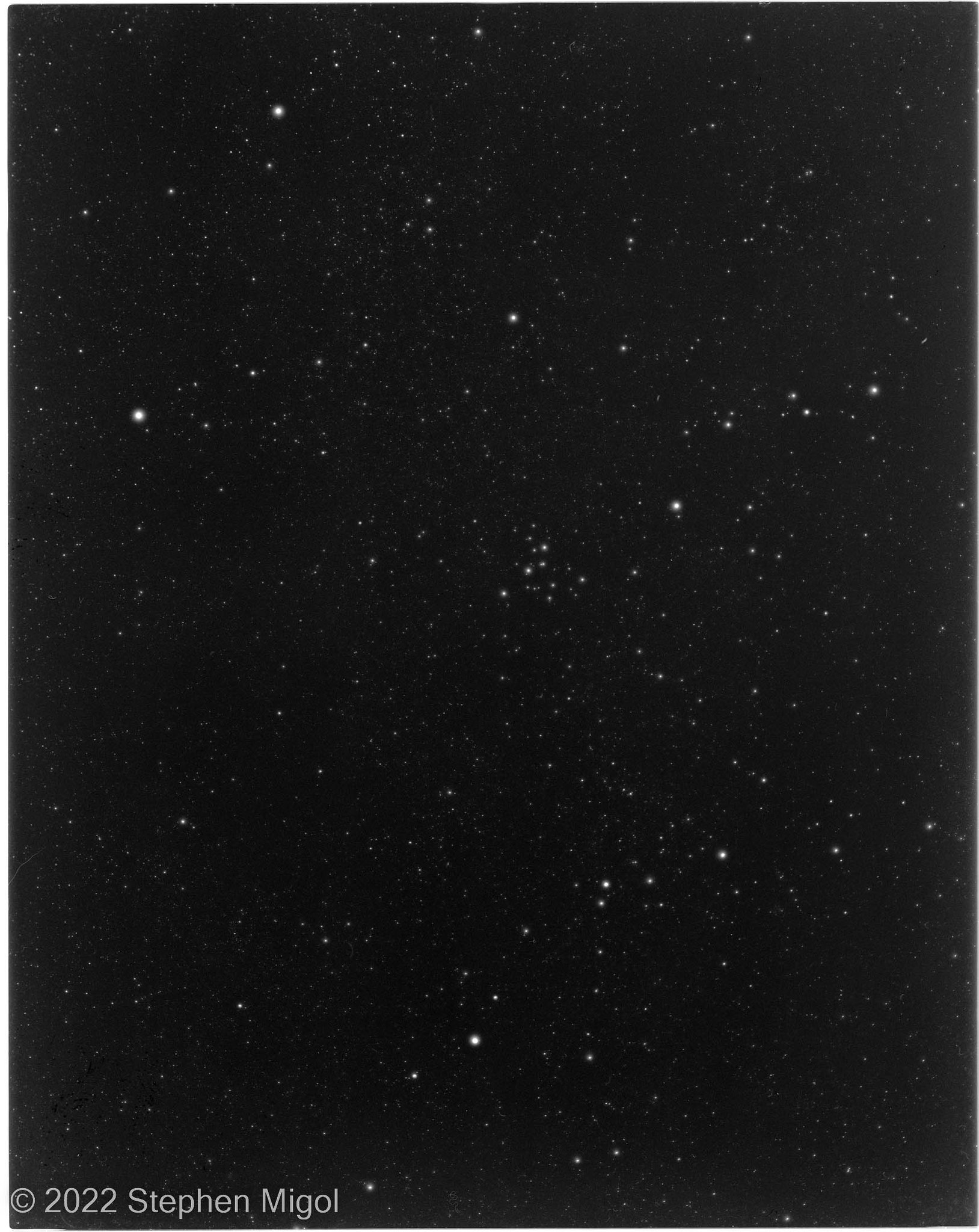 The detailed center portion of M39 shows the nice, round stars that appear.  There are quite a lot of them and they sit just above the grain.  I don't expect any extended objects to appear on this film, it doesn't respond well enough to the low light levels.  The stars show up so well because of the aperture.

It's a splendid view: 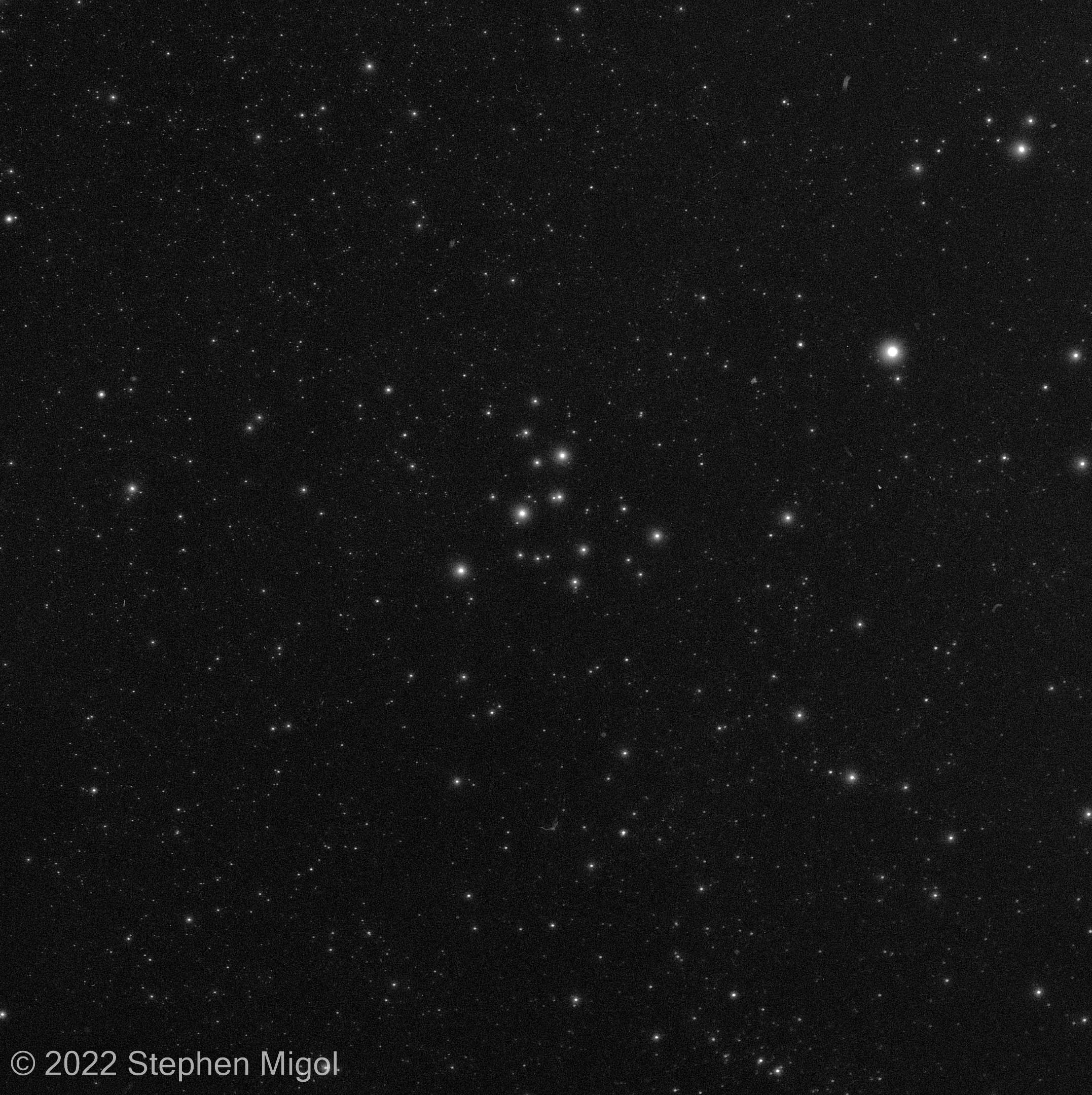 This lens is designed for 9x18 inch film, so it has a massive image circle.  More than enough to put two 4x5 sheets side by side or to put a 5x7 back or even 8x10 back on it.

These would require a whole new bellows and standard.  Luckily, the way it was built is not too hard to accomplish.

When I finally get to using the aerial film on a roll, then I can shoot the bigger formats if I invest in the hardware.

Still to be tested:

Film flatness will be checked by rotating the back to see if it follows the turn.  Also, will try different holders.  I know that the holder #1 had the curl (if it is that).

Tune the weight balance in RA and DEC to get more predictable behavior from the mount.  As it was, the RA balance was lopsided in the above examples and while I can reproduce this, I would rather not depend on improper setup to get the results.

Also wish to run the PHD2 tune process to get the ideal calibration and guiding settings.  During another session I saw that DEC wanted to wobble and tried turning the aggressiveness down a bit.

Once these have been tuned a bit under mooney skies, I will run up to Montebello and shoot Orion on a sheet of E100.