In the stretch of the moon cycle where I can get some practice and assembly done, I have these goals before the outing.  Nearly all have to be done under the sky where I can test by using stars.  Even with the moon waxing, there are some bright stars to use for all exercises.

1. Align the DSLR with the SV4 so that the flattener is optimally placed. 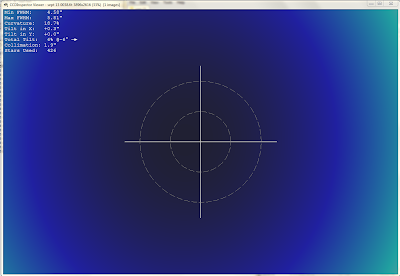 I have been using the SSF6 flattner for many years.  It's only been in the last year that I've become aware of a standard procedure for testing flatness and star size.  This method requires taking sample pictures and passing them through CCD Inspector for flatness and tilt.  Each time I'll need to tweak the alignment a bit.  It's down to shimming the tube and rings to ensure that the sensor is aligned as much as possible.  Luckily, the alignment is getting closer and closer.

Interestingly, I backed out of the tilting device I'd made earlier.  It did provide some tilt control but it placed a lot of horizontal strain on the focuser and camera mount.  The flatness of the setup left a lot to be desired.

As an important reference, I have gone back to my earlier subs and checked and I see that the flatness is all over the place.  Either the focuser wobbled or the way that the system flexed was giving horrible results.  The lesson here is that with all the work I've done, this year should give me great results.

Not only am I concerned about the alignment with the optical center of the scope with the flattner, I am also trying to optimize the distance from the flattener to the sensor.  I've been using a 1 mm spacer ring to give the optimal distance as 57 mm.  Now that I'm doing even more testing, I'll get into it and check again.  It's possible that less or even more will need to be added.  I may go so far as adding a 7 mm segment.


To this end, I've started using PHD2.  I had also been using the V method of imaging.  While it's a great tool, it can be slow.  I tried the PHD2 polar alignment method and it works very well.

The trick is to watch the trend lines while having DEC guiding off.  DEC still must be calibrated for this to work.  Once it's off and the scope is pointing to the right part of the sky, the graph trend lines will float to show how any cumulative drift is appearing.

Last night, AZ was pretty easy.  ALT was more difficult mainly because it was such a hairtrigger adjustment.  Approaching the perfect spot was hard with using just hands on the adjustment knob.  I will try using a wrench on it -- maybe even something as simple as putting a pipe clamp on the outside of it will give a purchase for fingers.  A better lever arm would be nice.

With this polar alignment done, I can estimate that the effort got the scope pointed very well - about 1 arc minute. 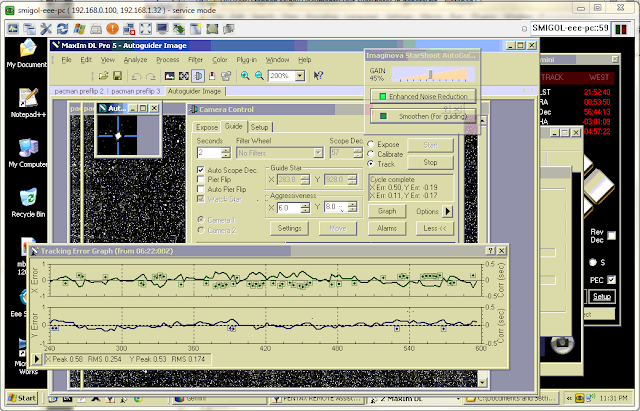 This effort depends a lot on good guiding.  With the PHD2 effort last night, I was able to fuss about with the SSAG settings and realized that with the smoothen and noise reduction features both turned on, I could run the camera at 100% gain.  This provides a solid boost to the SNR at the expense of details.  Also, when clouds started moving into the area, I watched the star intensity level drop.  This gave me the idea to bump up the exposure.  I was running 2, 3, and then 4 second guide exposures.  I would not have been able to do this without good polar alignment!  Interestingly, even when the skies cleared, the smoothen option kept the stars from saturating.  I guess I never learned how to do that properly.

As a nice bonus to the work I've been doing with fixing the flattener, I was able to remove much of the stress on the guide scope.  This has made the guide stars nice and round again.

I think that I can safely say that Maxim is properly set for now.

4. Understand the difference of noise floor and sky glow with my camera setup.

The challenge is that skyglow varies.  In the city, skyglow can be reached quickly.  For example, my recent exposures of the Pacman nebula showed average values of 119 ADU in the gaps between stars.  That's not bad, considering what we're assuming is the noise floor.  At Montebello OSP, I was seeing background numbers of 37 ADU.  That means that I could expose at MB for 3 times longer to reach the same density as I do at home or vice-versa.

The question becomes, are my 1200 second exposures at MB long enough?  Strangely, I can do this test from at home, using my light polluted skies.  The advantage here is that the light pollution registers faster and thus I can do the test quicker.

Here's what needs to be done: create a series of exposures that increment in duration.  Then I look at them later and see at what point the bias signal disappears and then the dark noise profile starts to show.  Increasing further, the skyglow should begin to register.

Once the skyglow gets bigger than the noise floor, then the subs are just loosing headroom.  The annoying factor is that when this happens, whatever faint objects are also lost in the noise.  It takes many sub exposures to build up the signal to noise ratio to compare with a dark sky site.

What do I expect?  I think that I will see that I could do exposures that are 1/2 to 1/3 as long at home to reach the same level of density as I've seen at MB.  What I would do at this point is see if there's enough signal to be worthwhile.  Does an exposure of 300 to 400 seconds have enough signal?

This would mean having to make a whole new library of darks at different lengths.

Will that be enough to get above the noise floor?  Yes, just barely.  It also says that on a good night, MB skies are nearly as dark as CALSTAR.

5. Set up and trial the GM8 for use as a wide field platform for film.


The GM8 currently has a Gemini 1 on it.  I've never learned how to use the Gemini 1 in practice, so this would be a big step for my understanding.  Luckily, Marek and a few others are using this version, so I can ask for help.  The real challenges I see are: learning to do alignments on both sides of the meridian so that a flip can be done with some accuracy, and getting good guiding from the Nexstar device.  I feel fairly confident about the first point, not so confident about the second.
Astrophotography Calstar 2013 DSLR Flattener image reduction noise reduction